The top legislative body of the Presbyterian Church (U.S.A.) has voted by large margins to recognize same-sex marriage as Christian in the church constitution, adding language that marriage can... 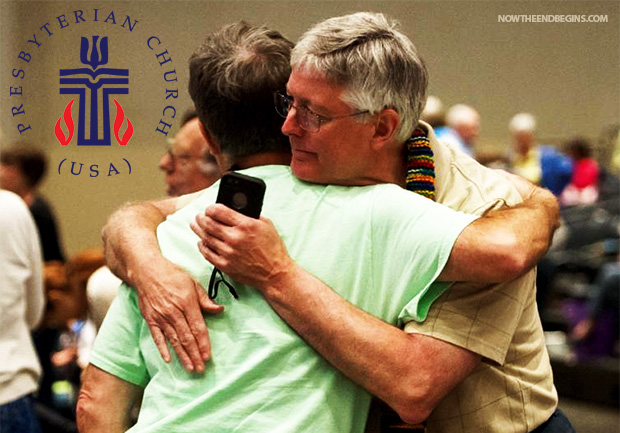 The Great Falling Away
by Geoffrey Grider June 20, 2014
NOW THE END BEGINS SHARE:

The Holy Bible clearly warns us that, in the last days, the professing Christian church would fall away from bible doctrine and practice, and be turned towards fables denying the faith of the scriptures. It has taken a very long time to get to that point, but it is safe to say that by all accounts, we are in the midst of the great falling away.

“For the time will come when they will not endure sound doctrine; but after their own lusts shall they heap to themselves teachers, having itching ears; And they shall turn away their ears from the truth, and shall be turned unto fables.” 2 Timothy 4:3,4

False teachers and preachers abound in our day like never before, motivated by greed, money and personal and professional gain. Self motivation and personal happiness, and not repentance and purity, are preached from the pulpits across America and around the globe. But the biggest indicator of all are the many once-mainstream Christian denominations who are fighting for and embracing the very thing that God’s word calls an “abomination” – the homosexual lifestyle.

The Great Falling Away

DETROIT (AP) — The top legislative body of the Presbyterian Church (U.S.A.) has voted by large margins to recognize same-sex marriage as Christian in the church constitution, adding language that marriage can be the union of “two people,” not just “a man and a woman.”

The amendment approved Thursday by the Presbyterian General Assembly requires approval from a majority of the 172 regional presbyteries, which will vote on the change over the next year. But in a separate policy change that takes effect at the end of this week’s meeting, delegates voted to allow ministers to preside at gay weddings in states where the unions are legal and local congregational leaders approve. Nineteen states and the District of Columbia recognize same-sex marriage.

The votes, during a national meeting in Detroit, were a sweeping victory for Presbyterian gay-rights advocates.