How Popular Is The Upcoming Satanic Black Mass In Oklahoma? SOLD OUT!

The Satanist group that will stage a controversial "black mass" at an Oklahoma City civic center has said that all 88 tickets for its Sept. 21 event are sold... 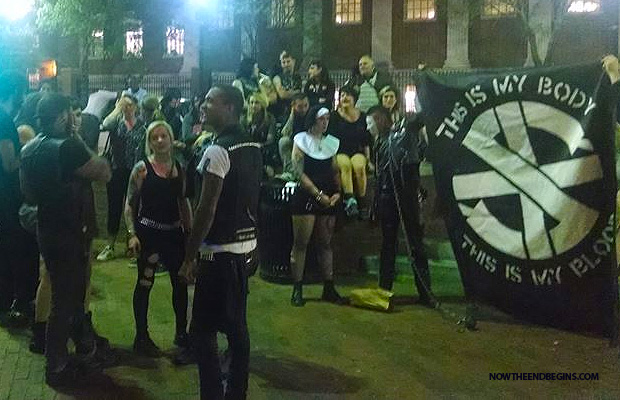 He added that the group will comply with state health laws and substitute vinegar for actions involving urine as part of the satanic ceremony.
by Geoffrey Grider September 12, 2014
NOW THE END BEGINS SHARE:

Is this an isolated event or the start of a movement in Obama’s post-Christian America?

“And this is the condemnation, that light is come into the world, and men loved darkness rather than light, because their deeds were evil.” John 3:19

The Satanist group that will stage a controversial “black mass” at an Oklahoma City civic center has said that all 88 tickets for its Sept. 21 event are sold out. The co-founder of the group revealed that the ritual will go ahead despite strong Christian protests and will feature a satanic exorcism, but will be “toned down” to comply with state health laws.

“One of the dictates of the church is not only to educate the members but to educate the public, and to debunk the Hollywood-projected image of our beliefs,” Dakhma of Angra Mainyu’s Adam Daniels told ABC News.

He added that the group will comply with state health laws and substitute vinegar for actions involving urine as part of the satanic ceremony.

Daniels said that the ceremony will also feature Dakhma of Angra Mainyu deacons and priest who will stomp, spit on and use explicit language on an unconsecrated host, a wafer presented as a form of the resurrected Jesus Christ.

A satanic exorcism intended to draw the Holy Spirit from a follower’s body will wrap up the event, an inversion of Roman Catholic exorcism believed to expel the devil from a person. “Our practices have gotten it to about 22 to 25 minutes,” the co-founder said of the length of the ritual.

Oklahoma Gov. Mary Fallin, Catholic Archbishop Paul Coakley, and over 80,000 people who have signed an online petition have all condemned the upcoming event.

Fallin called the black mass a “disgusting mockery of the Catholic faith,” saying that it should be “equally repellent to Catholics and non-Catholics alike.”

“It may be protected by the First Amendment, but that doesn’t mean we can’t condemn it in the strongest terms possible for the moral outrage which it is. It is shocking and disgusting that a group of New York City ‘satanists’ would travel all the way to Oklahoma to peddle their filth here. I pray they realize how hurtful their actions are and cancel this event,” she said.

Coakley has criticized city organizers for allowing the ceremony to go ahead.

“We’re astonished and grieved that the civic center would promote as entertainment and sell tickets for an event that is very transparently a blasphemous mockery of the mass,” Coakley said. The parks and recreation department, which rented the space, said that the satanist group is protected under the First Amendment, and will have to follow city laws.