Formal recognition of a Palestinian state by the Vatican, which has deep religious interests in the Israeli-occupied Palestinian territories that include Christian holy sites, lends a powerful signal of... 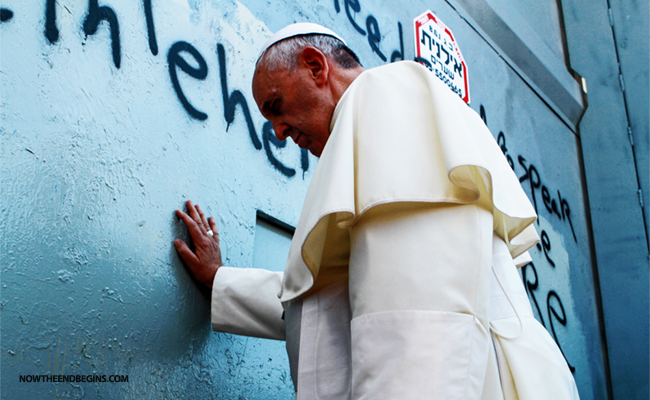 The Vatican said Wednesday that it had concluded a treaty to recognize Palestinian statehood, a significant step welcomed by Palestinians but upsetting to the Israeli government.

“And upon her forehead was a name written, MYSTERY, BABYLON THE GREAT, THE MOTHER OF HARLOTS AND ABOMINATIONS OF THE EARTH. And I saw the woman drunken with the blood of the saints, and with the blood of the martyrs of Jesus: and when I saw her, I wondered with great admiration. And the angel said unto me, Wherefore didst thou marvel? I will tell thee the mystery of the woman, and of the beast that carrieth her, which hath the seven heads and ten horns.” Revelation 17:15-17 (KJV)

EDITOR’S NOTE: Pope Francis is almost certainly the False Prophet mentioned in the book of Revelation. From a prophetic stand point, he has accomplished more in the last two years than the last 20 popes combined. And like all popes before him, he is absolutely the enemy of the state of Israel. As shocking as this is, it is only a warmup for the 7 Year Peace Treaty that will be brought by the False Prophet’s buddy, the Antichrist. The signing of today’s treaty advances the prophecy time clock forward by a huge leap.  Achtung, Juden.

ROME — Formal recognition of a Palestinian state by the Vatican, which has deep religious interests in the Israeli-occupied Palestinian territories that include Christian holy sites, lends a powerful signal of moral authority and legitimacy to the efforts by the Palestinian Authority’s president, Mahmoud Abbas, to achieve statehood despite the long paralyzed Israeli-Palestinian peace process.

The Bilateral Commission of the Holy See and the State of Palestine at the Vatican announced Wednesday that they have reached accord on the language of the Comprehensive Agreement toward which they have been working.

A statement from a joint commission of Vatican and Palestinian diplomatic officials, posted on the Vatican news website, said “the work of the commission on the text of the agreement has been concluded,” and that it would be submitted for formal approval and for signing “in the near future.”

Hanna Amireh, head of a Palestinian committee on church affairs, said the treaty was a broad one regarding the Vatican’s interests in the West Bank, East Jerusalem and the Gaza Strip, including the standing of churches and church courts and taxes on church charities, institutions and lands, as well as other cultural and diplomatic matters. He said it had been under negotiation for about a year.

“The Vatican is the spiritual capital of the Catholics, and they are recognizing Palestine, that’s the chief importance,” said Mr. Amireh, who is also a member of the Palestine Liberation Organization’s executive committee. The move counters an image of Palestinians as militants or terrorists, he added, as a “recognition of the Palestinian character that has a clear message for coexistence and peace.” source