"Humanity needs to weep and this is the time to weep," Francis said in the homily of a Mass during a visit to Italy's largest war memorial, a large,... 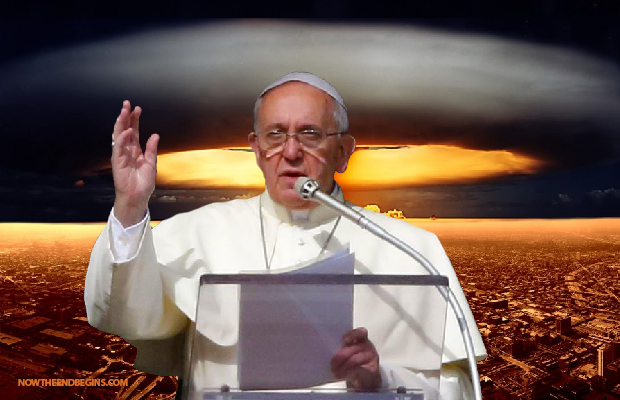 Is Francis the herald of the prophesied one world religion?

REDIPUGLIA Italy – Pope Francis said on Saturday the spate of conflicts around the globe today were effectively a “piecemeal” Third World War, condemning the arms trade and “plotters of terrorism” sowing death and destruction.

“Humanity needs to weep and this is the time to weep,” Francis said in the homily of a Mass during a visit to Italy’s largest war memorial, a large, Fascist-era monument where more than 100,000 soldiers who died in World War One are buried.

In his homily, read at a somber service to thousands of people braving the rain and which included the hauntingly funereal sound of a solitary bugle, Francis condemned “plotters of terrorism” but did not elaborate.

The pope began his brief visit to northern Italy by first praying in a nearby, separate cemetery for some 15,000 soldiers from five nations of the Austro-Hungarian empire which were on the losing side of the Great War that broke out 100 years ago.

“War is madness,” he said in his homily before the massive, sloping granite memorial, made of 22 steps on the side of hill with three crosses at the top.

“Even today, after the second failure of another world war, perhaps one can speak of a third war, one fought piecemeal, with crimes, massacres, destruction,” he said.

In the past few months, Francis has made repeated appeals for an end to conflicts in Ukraine, Iraq, Syria, Gaza and parts of Africa.

“War is irrational; its only plan is to bring destruction: it seeks to grow by destroying,” he said. “Greed, intolerance, the lust for power. These motives underlie the decision to go to war and they are too often justified by an ideology …,” he said.

Last month the pope, who has often condemned the concept of war in God’s name, said it would be legitimate for the international community to use force to stop “unjust aggression” by Islamic State militants who have killed or displaced thousands of people in Iraq and Syria, many of them Christians.