On June 18th, just three days from today, Pope Francis and the Vatican State are ready to launch a summer-long campaign which will reach it's zenith in an unprecedented... 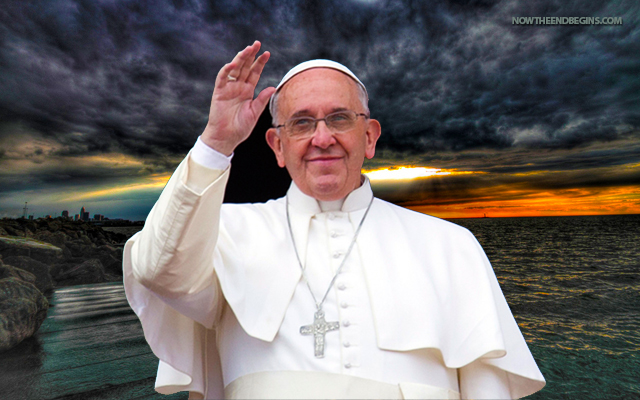 On June 18th, just three days from today, Pope Francis and the Vatican State are ready to launch a summer-long campaign which will reach it’s zenith in an unprecedented tour of America. Pope Francis has been working on his “sermon” all year, and it’s one that will thoroughly delight Bible prophecy watchers. Francis is going to preach on the need to massively reduce the world’s population, stopping climate change, and having a One World Government to rule the planet.

Professor John Schnellnhuber, founding director of the Postdam Institute for Climate Impact Research, is one of three scientists hand-picked by the Vatican to help advance this new tri-fold agenda. Schnellnhuber is also author of what’s called the “two-degree target” that says governments must not allow the temperature to rise more than 2 degrees higher than at the start of the industrial revolution. Any higher, the theory holds, and much life on earth would either perish or be gravely harmed.

To deal with climate issues, he has also called for an “Earth Constitution that would transcend the UN Charter” along with the creation of a “Global Council…elected by all the people on Earth” and a “Planetary Court..a transnational legal body open to appeals from everybody, especially with respect to violations of the Earth Constitution.” The two main issues of “protecting the earth” are climate change and global depopulation.

Italian Magazine L’Espresso leaked Pope Francis’ hotly anticipated encyclical on climate change on its website on Monday, breaking an embargo on the document set for Thursday.

The 192-page document is Pope Francis’ first major teaching letter on climate change and its effects on the planet’s poor. Hailed by some as the “pope of the poor,” Francis’ linkage of environmental and economic issues puts the Vatican out front on a closely watched topic.

A Vatican official told Bloomberg News that the leak was a “heinous act.”

The False Prophet of Revelation

Make no mistake about it, Pope Francis has a full-on political agenda, and he is going to use his pulpit to advance it. He is not content to merely be the Pope of the world’s Catholics, he craves raw political power as well. Revelation 17 and 18, talking about the Vatican and the Catholic Church, clearly show her to also be a political force that reigns over the world’s kings. Francis is doing his best to bring that about here and now.