Pope Francis has granted a "plenary indulgence' for those taking part in the WMOF this year, the BBC reported today. In Catholic doctrine an indulgence frees you from being punished for your previously committed sins or it can be passed on to dead relatives to shorten their time in purgatory. Even those following events on TV and radio can achieve a partial indulgence as long as they recite the Our Father, the Creed and other devout prayers.

Participants attending the World Meeting of Families in August can be forgiven their sins or help a Catholic relative speed their way through purgatory.

Like the character of Nick the Bartender in the Christmas classic ‘It’s A Wonderful Life‘, leader of the Catholic religion Pope Francis is ‘giving out wings‘ at the upcoming World Meeting of Families in Ireland in August of this year. And the ‘wings’ to ‘speed through purgatory’ being given out by the pope are every bit as meaningless and worthless as were the ‘wings’ from Nick the Bartender.

“So he carried me away in the spirit into the wilderness: and I saw a woman sit upon a scarlet coloured beast, full of names of blasphemy, having seven heads and ten horns. And the woman was arrayed in purple and scarlet colour, and decked with gold and precious stones and pearls, having a golden cup in her hand full of abominations and filthiness of her fornication: And upon her forehead was a name written, MYSTERY, BABYLON THE GREAT, THE MOTHER OF HARLOTS AND ABOMINATIONS OF THE EARTH.” Revelation 17:3,4 (KJB)

Pope Francis has granted a “plenary indulgence’ for those taking part in the WMOF this year, the BBC reported today. In Catholic doctrine an indulgence frees you from being punished for your previously committed sins or it can be passed on to dead relatives to shorten their time in purgatory. Even those following events on TV and radio can achieve a partial indulgence as long as they recite the Our Father, the Creed and other devout prayers.

Memo to Pope Francis: Better pull up your skirt, your con game is showing.

Purgatory, unlike Hell, is an imaginary place that exists nowhere but in the fanciful imaginations of the Roman Catholic harlot. But the Vatican did indeed add this blasphemous lie to their lineup of blasphemous doctrine around the 11th century AD. What exactly is the Catholic doctrine of purgatory, you ask? Let’s let the folks over at CatholicAnswers.com give us the lowdown, don’t want to ‘misquote’ what they teach. But suffice to say, the con game goes like this:

FROM CATHOLIC ANSWERS: The Catechism of the Catholic Church defines purgatory as a “purification, so as to achieve the holiness necessary to enter the joy of heaven,” which is experienced by those “who die in God’s grace and friendship, but still imperfectly purified” (CCC 1030). It notes that “this final purification of the elect . . . is entirely different from the punishment of the damned” (CCC 1031).  The purification is necessary because, as Scripture teaches, nothing unclean will enter the presence of God in heaven (Rev. 21:27) and, while we may die with our mortal sins forgiven, there can still be many impurities in us, specifically venial sins and the temporal punishment due to sins already forgiven. source

Now, please turn in your King James Bible and let’s look at the doctrine of purgatory. Umm…no, you’ll not find it in either Testament for it exists only in the teachings of the ‘early church fathers’ in a piece of trash known as the unbiblical Apocrypha. But purgatory exists no where in the Bible.

“As soon as the coin in the coffer rings, The soul from Purgatory springs.’ Johann Tetzel

Now after they invented this lie in the 11th century, they dropped the ‘other shoe’ and told Catholics that if your loved one has died and is in Purgatory, the only way to get them out was to have ‘special masses’ said for them. Of course, having a ‘special mass’ said does not come cheap, so the family of the purgatizing loved one had to pony up big bucks, or their homes, or give away their land to the Vatican. Basically, anything of financial value was bartered in exchange for the magical ‘special mass’ to be said.

Talk about a ponzi scheme, talk about a con game! But seriously, brethren, when you refuse to believe the Bible, you will believe just about anything else. Even doctrine that sounds like it was crafted by old PT Barnum himself.

Now you know where the Vatican billions came from, and how the Vatican grew to be the wealthiest corporation on the face of the earth. But I digress, let’s get back to what the pope will be doing at the WMOF in August. 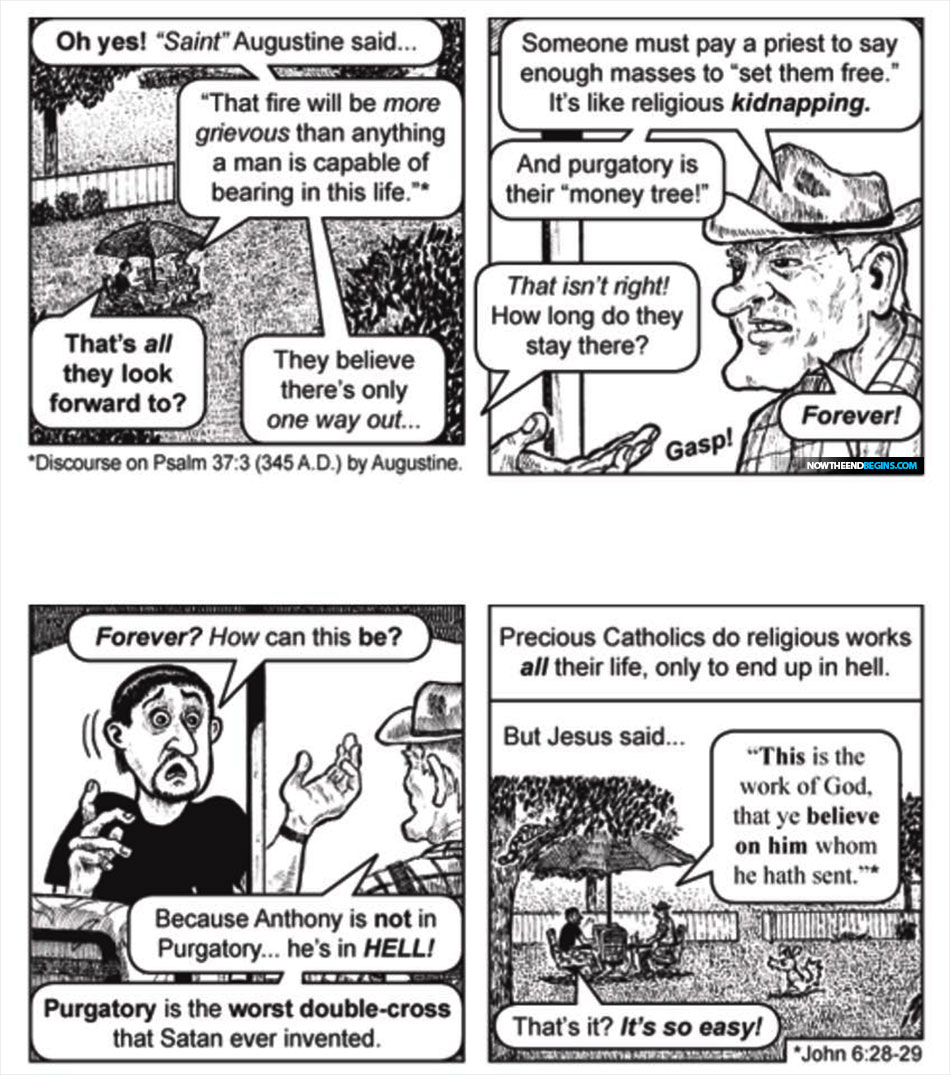 Pope Francis will be handing out these ‘express line’ tickets for Catholic loved ones in Purgatory, in exchange for ‘climbing Ireland’s holy mountain and pray in the chapel at the top’, ‘pray for the dead on specially-arranged dates’, visiting approved shrines and statues’, and of course, by putting a nice, sizable offering into the collection plate.

The Bible refers to the Catholic Church as MYSTERY, BABYLON THE GREAT, THE MOTHER OF HARLOTS AND ABOMINATIONS OF THE EARTH. And so she is. The Bible also has a message of warning to all the followers of the Vatican counterfeit, disregard it at your own eternal peril.