A papal encyclical is rare. It is among the highest levels of a pope’s authority. It will be 50 to 60 pages long; it’s a big deal.... 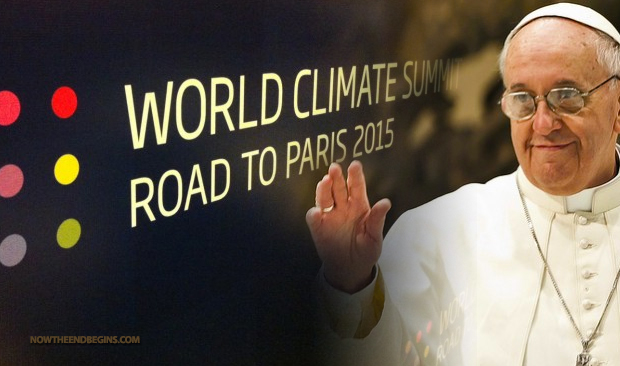 Pope Francis aims to be major political player in 2015

“And the kings of the earth, who have committed fornication and lived deliciously with her, shall bewail her, and lament for her, when they shall see the smoke of her burning, Standing afar off for the fear of her torment, saying, Alas, alas, that great city Babylon, that mighty city! for in one hour is thy judgment come.” Revelation 18:9,10

Pope Francis is about to take the stage in the role that he was born to play – world political power broker. Not content to simply be the spiritual overseer of the world’s 1.2 billion Catholics, Francis has much bigger goals in mind for himself and for the Vatican. He has written a rare papal encyclical, and on a topic that is absolutely polarizing, global warming.

Dan Misleh, director of the Catholic climate covenant, said: “A papal encyclical is rare. It is among the highest levels of a pope’s authority. It will be 50 to 60 pages long; it’s a big deal. But there is a contingent of Catholics here who say he should not be getting involved in political issues, that he is outside his expertise.” source

Climate change is a multi-billion dollar business, and it’s about to get even bigger. Pope Francis entered the political world as a major player last week when it was stunningly revealed that he had helped broker a secret UN-Cuba peace treaty deal. That enormous feat, as it turns out, was only the warm-up. In 2015, he is going to throw the full weight of his office and the Vatican behind climate change in an effort to get every major nation on board and contributing billions to the cause. This is something that, so far, no political figure from any nation has been able to accomplish. Getting this done will propel him to a status never held by any pope. The power he will gain unprecedented.

According to Neil Thorns, head of advocacy at Cafod, said: “The anticipation around Pope Francis’s forthcoming encyclical is unprecedented. We have seen thousands of our supporters commit to making sure their MPs know climate change is affecting the poorest communities.” source

The book of Revelation clearly says, talking about the Catholic Church in chapters 17 and 18, that in the end times the Vatican will be a world political power who does business with “all the kings of the earth”. And not just in business with them, but wielding power over them. All of them.

“And the woman which thou sawest is that great city, which reigneth over the kings of the earth.” Revelation 17:18

Francis will also be opposed by the powerful US evangelical movement, said Calvin Beisner, spokesman for the conservative Cornwall Alliance for the Stewardship of Creation, which has declared the US environmental movement to be “un-biblical” and a false religion. “The pope should back off,” he said. “The Catholic church is correct on the ethical principles but has been misled on the science. It follows that the policies the Vatican is promoting are incorrect. Our position reflects the views of millions of evangelical Christians in the US.” source

Pope Francis has begun his ascension to fulfill that role, the ruler of kings, his destiny as foretold by the pages of scripture.