Pope Francis is about to release his encyclical about global warming and is expected to advocate for cutting the fossil fuel use that he and others blame for temperature... 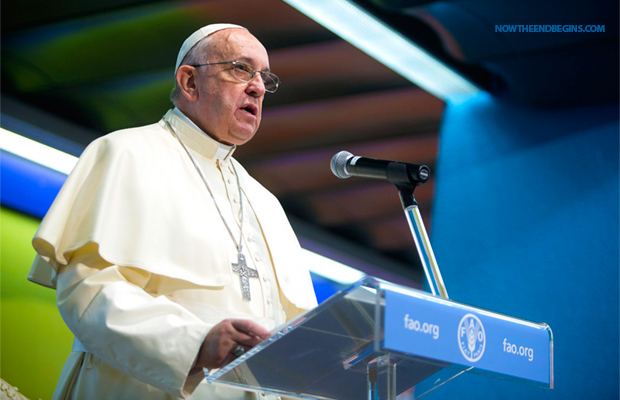 Pope Francis is about to release his encyclical about global warming and is expected to advocate for cutting the fossil fuel use that he and others blame for temperature rises.

EDITOR’S NOTE: If your perception of Pope Francis is of a sweet, little old man who likes to mumble prayers in Italian and kiss babies on the cheek, get that thought out of your head immediately. Pope Francis is a shrewd, savvy, highly-motivated political player who is throwing the full weight of the Vatican with it’s 1.3 billion followers behind a Marxist globalist agenda to usher in the New World Order. This pope is the game-changer who just may actually be the False Prophet mentioned in the book of Revelation. And is it any surprise that we see George Soros connected to the Pope’s push? Seriously.

A Vatican declaration authored by the Pontifical Academy of Sciences (PAS) and others who attended a meeting Tuesday on global warming. The document from participants of the meeting pushes for ditching market economies to fight global warming and environmental degradation.

“Market forces alone, bereft of ethical values, cannot solve the intertwined crises of poverty, exclusion, and the environment,” the document adds. “The move to a sustainable world will not be cost-free for all: the options we face are not ‘win-win.’”

Pope Francis and George Soros…are you kidding me? Nope.

“Present economic systems have been accompanied by the development of unacceptable gaps between the rich and the poor,” the PAS writes, “the latter still lacking access to most of the scientific and technical benefits that we have developed in the industrial world.”

“We should be prepared to accept a reallocation of the benefits and burdens that accompany humanity’s activities both within nations and between nations,” according to the PAS document.

Pope Francis made headlines this week by promising to weigh in on the global warming debate, meeting with United Nations officials and scientists to discuss the issue and possible solutions to stemming global temperature rises and predicted ecological catastrophe.

Judging by what participants of the Vatican’s climate meeting wrote, the Papacy could come out hard against market economies that utilize fossil fuels for development. But given the authors of the document, it shouldn’t be surprising.

One of the authors is economist Jeffrey Sachs who now heads up Columbia University’s Earth Institute. Sachs has been heavily backed by liberal philanthropist George Soros. Years ago, Soros donated $50 million to a project co-run by Sach’s nonprofit the Millennium Promise.

Read the rest of the story on the Daily Caller…