Her name is Officer Specter, and she’s a Cyclops cop voiced by openly gay screenwriter and actress Lena Waithe. While Specter’s inclusion in Onward is a major first for Disney, it’s treated almost matter-of-factly in the movie itself, which the filmmakers say is by design. “It just kind of happened,” Onward producer Kori Rae tells Yahoo Entertainment. “The scene, when we wrote it, was kind of fitting and it opens up the world a little bit, and that’s what we wanted.” Adds director Dan Scanlon, “It’s a modern fantasy world and we want to represent the modern world.”

The upcoming movie ‘Onward’ in theaters on March 6, will feature a self-identified lesbian heroine with a girlfriend, the first-ever animated LGBTQ+ character in the Disney Pixar universe.

Remember when a production by Disney meant high-quality wholesome family entertainment? Wow, you must be pretty old because it’s been a long time since anything from Disney could be considered wholesome. To that point, their new movie ‘Onward’ due out in just 2 weeks on March 6, and it will feature the first-ever LGBTQ+ Disney character. Her name is Officer Specter, she has a girlfriend, and Disney Pixar is excited to get your children thinking in that direction.

Why all this push by makers of kid’s movies to have LGBTQ+ characters? Because the LGBTQ+P for Pedophile Movement has demanded that 20% of all programming must include LGBTQ+ characters, and the profit-driven captains of industry are only too eager to comply. If you watch television, go to the movies or use the Internet there is no escaping this end times push to recruit your kids into the LGBTQ+ lifestyle. Will you be taking your kids to see ‘Onward’?

FROM THE CHRISTIAN POST: The character, named Officer Specter, will be a Cyclops cop, voiced by openly gay screenwriter and actress Lena Waithe, Yahoo Entertainment reported.

“It just kind of happened,” the film’s producer, Kori Rae, was quoted as saying. “The scene, when we wrote it, was kind of fitting and it opens up the world a little bit, and that’s what we wanted.” 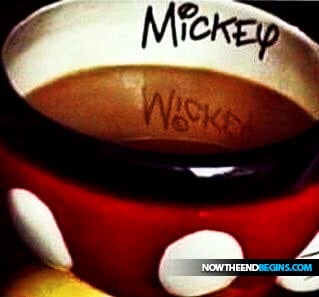 The film is set in a magical universe with fantastical citizens, who have lost their connection to the magical arts. According to the film’s description, “two teenage elf brothers … embark on an extraordinary quest to discover if there is still a little magic left out there.”

The season three finale of the series concluded with the scene between Cyrus Goodman (played by Joshua Rush) confessing his attraction to his classmate TJ Kippen (Luke Mullen). While this was Disney’s first depiction of a teen same-sex relationship, the first same-sex adult couple in a Disney show for kids occurred in 2014 on “Good Luck Charlie.”

The multinational mass media and entertainment company has been slowly adopting and promoting LGBTQ+ views, as seen on its television shows and movies such as “Beauty and the Beast” and “Doc McStuffins” in 2018. In 2017, “Star vs. the Forces of Evil” introduced the company’s first male princess on the same show that previously drew controversy for featuring the first same-sex kisses. READ MORE

Upcoming film ‘Onward’ will be the first film from the house of Disney-Pixar to feature a character who self-identifies as LGBTQ. The new animated film, set in a mystical land of elves and dragons, includes a policewoman named ‘Officer Specter’ who refers to her girlfriend. The character of ‘Officer Specter’ will be voiced by Emmy award-winning screenwriter and actress Lena Waithe. ‘Onward’ tells the story of two elf brothers who embark on a magical quest together, the film opens in theaters on the 6th of March.