US Secretary of State John Kerry has nothing but threats and ire for Syrian dictator Bashar al-Assad. But it wasn't all that long ago that Kerry, Assad and their... 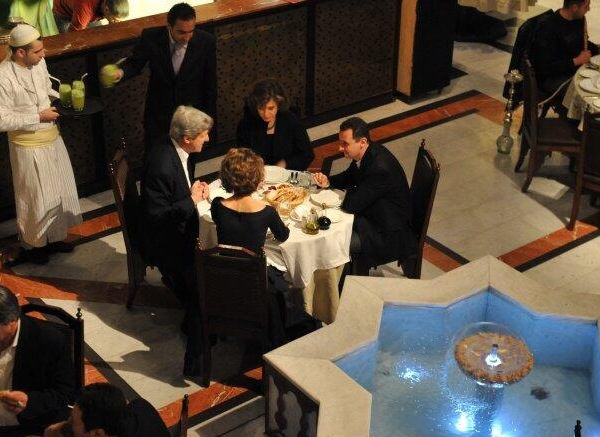 A cozy dinner for four

At the moment, US Secretary of State John Kerry has nothing but threats and ire for Syrian dictator Bashar al-Assad. But it wasn’t all that long ago that Kerry, Assad and their wives were huddled together and sharing an intimate dinner for four.

Smiles all around as John Kerry, Assad and their wives get cozy for a nice, long dinner in 2009

Flash forward to August 2013: Headlines across the globe heralded U.S. Secretary of State John Kerry’s scathing indictment of Syria that it was “undeniable” that President Bashar Assad’s regime used chemical weapons last week and that the “moral obscenity” should “shock the conscience of the world.”

Kerry added Monday that “our sense of basic humanity is offended, not only by this cowardly crime, but also by the cynical attempt to cover it up” and that Assad’s “belated decision to allow access is too late and is too late to be credible.” Blaze

So next time you turn the news on, kids, remember that it’s all a sham. It’s nothing but a sad, sick stageplay designed to fool you, the viewer. Our government, like all governments, wants desperately to distract you from what they are really doing in hopes that you will spend so much time pitting “red against blue” that you will fail to notice the FEMA Camps, the 24 hour surveillance, the suspending of the US Constitution, martial law in Boston and all the rest of it.

But please, go back to sleep. There is nothing to see here.