The ultimate goal is to increase the “persistence, protection, and endurance” of military robots, which will in turn “decrease physical and cognitive workloads on our warfighters, while increasing their... 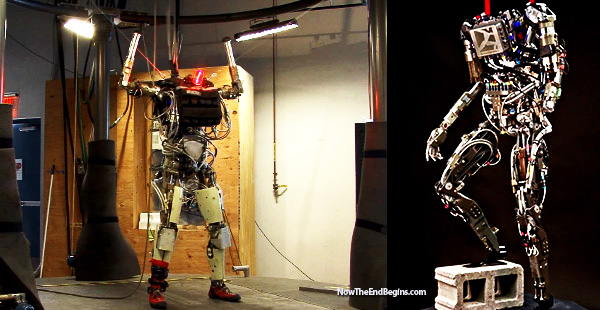 At a NASCAR racetrack in Miami earlier this month, teams from NASA, Google, and 14 other groups of engineering gurus put cutting-edge robots through some challenging paces. The aim was to see how well the robots could tackle tasks that may sound simple, but are tricky for non-humans – including, say, climbing a ladder, unscrewing a hose from a spigot, navigating over rubble, and steering a car.

The contest was dreamed up by the Pentagon’s futuristic experimentation arm, the Defense Advanced Research Projects Agency (DARPA), and senior defense officials were watching it carefully – well aware that the Pentagon is growing increasingly reliant on robotics.

The Defense Department will become even more reliant on such devices in the decades to come. That’s the conclusion of a new blueprint quietly released by the Pentagon this week, which offers some telling clues about the future of unmanned systems – in other words, drones and robots.

The study, the Unmanned Systems Integrated Roadmap, is meant to provide the Pentagon with a “technological vision” for the next 25 years – a vision that will be “critical to future success” of the US military, according to its authors.

“Over the past decade, the qualities and types of unmanned systems acquired by the military departments have grown, and their capabilities have become integral to warfighter operations,” the study notes. “The size, sophistication, and cost of the unmanned systems portfolio have grown to rival traditional manned systems.”

In the future, the ideal robots will be able to take on “the ‘four D’s’ – jobs that are dirty, dangerous, dull, and difficult” for the US military, says Michael Toscano, president and CEO of the Association for Unmanned Vehicle Systems International in Arlington, Va.

The DARPA competition, for example, was inspired by the meltdown at the Fukushima Daiichi nuclear plant in Japan, when workers risked radiation poisoning to try to shut off a key valve.

The US Army and Marine Corps have for years used robots to dismantle roadside bombs inAmerica’s wars, and the DOD is developing pack robots like BigDog – designed by Boston Dynamics, a firm recently purchased by Google – to haul soldiers’ gear in the steep and rocky mountains of Afghanistan.

The Pentagon’s unmanned systems road map signals that the Pentagon will continue to deepen its forays into robotics and artificial intelligence for use on land, in the air, and at sea.

The Air Force wants stealth drones that can operate not only in places like Afghanistan, where the Taliban has no planes or missile systems that could pose a threat to US aircraft, but also in “contested environments,” above countries that do have sophisticated air defense systems.

Within all the services, one considerable engineering challenge for unmanned systems is in the cyber realm: making sure encryption is good enough for protecting data streams that are crucial to the operations of drones and robots.

The ultimate goal is to increase the “persistence, protection, and endurance” of military robots, which will in turn “decrease physical and cognitive workloads on our warfighters, while increasing their combat capabilities,” the Pentagon report notes. “The end state is an affordable, modernized force as a manned-unmanned team with improved movement and maneuver, protection, intelligence, and sustainment.”

Back at the NASCAR speedway, the 16 robot teams completed the tasks with varying degrees of success and were scored on a point system. The eight winners, which included teams from Google – including Google’s new purchase, Boston Dynamics – will come together again next December for a $2 million prize.

In the US military of 2014 and beyond – and in the commercial realms – there is likely to be “more of an interaction between man and artificial intelligence and robotics,” Mr. Toscano says. “There’s a high probability that it’ll be a relationship of man and machine collaboratively living and working together.”

This might include sending robots into burning forests that would risk the lives of human firefighters and even using robotic animals like moose that could infiltrate a herd to help monitor migration patterns. “These are magical things,” Toscano says. “This is imagination.”

Google’s purchase last month of Boston Dynamics, the company that makes BigDog and other military robots, shows how commercial companies are increasingly believing in the power of robotics to drive innovations. “Companies like Google always go after the cream of the crop – the big thinkers – in search of where the next great invention is going to come from,” Toscano notes.