Hamas has said an Israeli air strike in Gaza killed Ahmed Jabari, the head of its military wing, in an attack on a vehicle on Wednesday.... 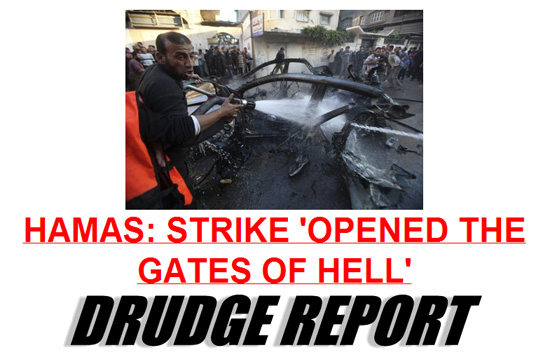 The military wing of Hamas said in a statement that the assassination "has opened the gates of hell".
by Geoffrey Grider November 14, 2012
NOW THE END BEGINS SHARE:

Hamas has said an Israeli air strike in Gaza killed Ahmed Jabari, the head of its military wing, in an attack on a vehicle on Wednesday.

The military wing of Hamas said in a statement that the assassination “has opened the gates of hell”.

Israel’s military said the strike was the “start of targeting Gaza militants”, according to AFP. Witnesses say Jabari was travelling in his vehicle in Gaza City when his car exploded.

Jabari is the most senior Hamas official to be killed since an Israeli invasion of Gaza four years ago. He has long topped Israel’s most-wanted list, the Associated Press reported.

Israeli officials had said in recent days that they were considering assassinating top Hamas officials following a wave of heavy rocket fire from the Hamas-ruled Gaza Strip.

Israel’s Shin Bet domestic intelligence service confirmed it had carried out the attack, saying it had killed Jaabri because of his “decade-long terrorist activity”.

“One citizen was killed and another moderately injured in a Zionist strike on a car in Gaza City,” spokesman Ashraf al-Qudra told AFP.

Another Israeli military spokesman, Brigadier-General Yoav Mordechai, said the aerial assault on the Gaza Strip on Wednesday could draw cross-border Palestinian rocket attacks and stretch into days of fighting.

“The days we face in the south will, in my estimation, prove protracted,” he told Channel 2 TV. “The homefront must brace itself resiliently.”

Meanwhile, an Israeli official said they may try to topple President Mahmoud Abbas if he carries out a plan to ask the United Nations this month to upgrade the status of the Palestinian Authority.

The upgrade would give the Palestinians a place in the world body akin to that of the Vatican – short of full membership as a sovereign state but as close as they can get without the full recognition that Israel says can only come from a peace treaty.

A draft document from the office of Israeli Foreign Minister Avigdor Lieberman, seen by Reuters, said Israel must confront this challenge by means that could include “toppling (Abbas) and dismantling the Palestinian Authority”.

Lieberman said in a speech at the settlement of Ariel in the occupied West Bank that if the Palestinian upgrade request was accepted by the UN General Assembly – as is widely predicted – it could force Israel to punish the Palestinians.

“If the … proposal is adopted at the United Nations General Assembly, as far as we are concerned this would be a complete breaking of the rules and it will elicit an extreme response from us,” Lieberman said on Wednesday.

Newspaper reports say Israel instructed its ambassadors to warn it may revoke all or part of the 1993 Oslo Accords between Israel and the Palestine Liberation Organisation, which set up the Palestinian Authority under an interim peace agreement. source – Telegraph UK