Last week in the town of Hannover in Germany, Muslim migrants, no longer pretending to be "refugees", marched through the city streets waving the black flag of ISIS and... 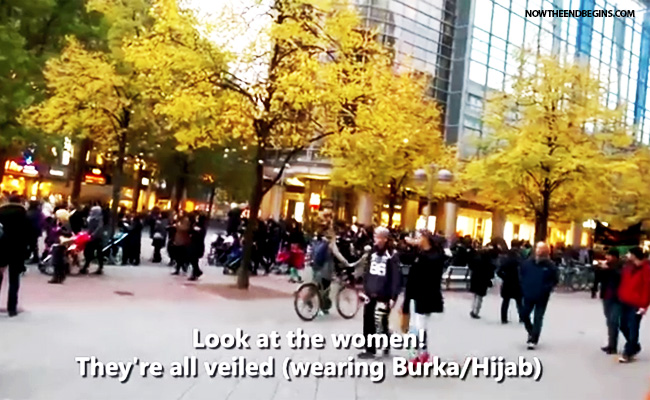 “Look at the women! They’re all veiled!”

Last week in the town of Hannover in Germany, Muslim migrants, no longer pretending to be “refugees”, marched through the city streets waving the black flag of ISIS and claiming the land for Allah. I don’t know how many times we have to say it – but – they are not refugees and they are not migrants. They are Islamic jihadis who are acting en masse to claim Europe for Allah and Islam. They are not assimilating and they will not assimilate into the culture of their host nations. They will demand that you submit to the Sharia, and guess what? That’s exactly what’s happening. In England, it has already happened. If you ever wanted to know what it was like to watch the downfall of a major nation, you’re looking at it. This is what they desperately want to do in America, and Obama is helping them to do it.

The German girls voices you hear in this video are saying this:

“I thought I was the only one who’s in a bad mood because of this.”

“None of us want this. We’re all scared.”

“This is not my life. It just shows you how many of them are here already.”

“Now there’s another 1.5 million who came this year.”

“Here, no! They won’t take anything from me!”

“Look, when I walk through the streets of the city, it’s only foreigners!”

“There are walking 50 foreigners and I only see one European face.”

“Look at the women! They’re all veiled!”

“This is our future.”