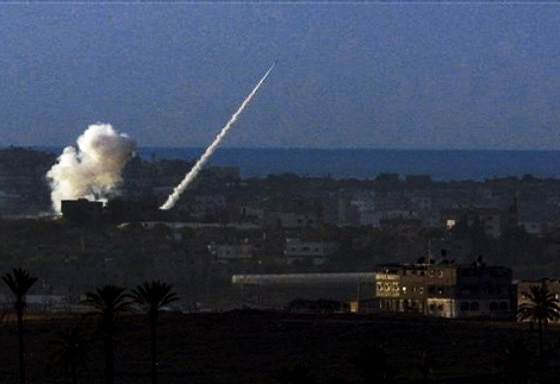 Palestinian terrorists from the Gaza Strip fired two Grad rockets into Israel overnight Saturday, damaging two buildings in Netivot and causing five civilians to suffer shock symptoms. The attacks came just days after an escalation along Israel’s southern border which resulted in the killing of six Palestinians the IDF said were plotting terrorist attacks against Israelis.

Around 2:00 a.m., terrorists fired a Grad rocket at Beersheba. Residents in the city heard an explosion, but there were no reports of damage. Authorities searched the city for the remains of the rocket. The Iron Dome battery stationed near the city did not launch an intercept as the Grad fell in an open area and did not endanger the civilian population.

Shortly after, terrorists fired a rocket at the city of Netivot. The rocket struck two homes, and heavy damage was done to the buildings. Upon hearing the emergency siren indicating an incoming rocket, a resident in one of the houses took refuge in the bathroom, escaping the blast.

Five civilians were treated for shock as a result of the attacks.

On Wednesday night, IAF aircraft targeted a terrorist squad in the central Gaza Strip during final preparations to fire rockets at Israel. Palestinian sources said at least three men were killed in the air strike, and one wounded. The cell had been involved in rocket fire on southern Israel in the past, according to the IDF.

On Thursday morning, the IDF attacked a terrorist cell attempting to place a bomb on the Gaza border. Infantrymen from the Givati Brigade along with tanks and aircraft successfully struck the cell. Palestinian sources said that three people were killed by IDF fire in the incident.

Towards the end of August, Palestinians fired several rockets at Israel, one of which struck and damaged a home in Sderot.

Defense Minister Ehud Barak said Friday that the IDF could conquer and exert control over the Gaza Strip if the cabinet orders such an operation. Speaking at a conference at the Fisher Brothers Institute for Air and Space Strategic Studies, Barak said “if the cabinet will want the IDF to conquer and control Gaza, this is something that is possible today if it is deemed fit.” source – JPost