Four Kassam rockets were fired from the Gaza Strip at the Eshkol Regional Council on Wednesday evening in two separate incidents, less than an hour apart. Earlier in the... 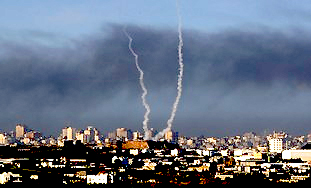 Four Kassam rockets were fired from the Gaza Strip at the Eshkol Regional Council on Wednesday evening in two separate incidents, less than an hour apart. Earlier in the evening, two rockets landed in open land near Ofakim shortly after a Kassam rocket fell in an open field north of the Gaza strip near Ashkelon. No injuries were or damage were reported.
At the same time, air raid sirens were also heard in the Beersheba region. A Beersheba city  spokesman said that the source of the sirens was from one of the nearby towns and not the city itself.

The Home Front Command on Wednesday canceled the “Breeza” Festival in Ashkelon following rocket fire alerts that were received for the southern region. Members of the public were asked not to arrive at the festival and to follow instructions by given by the Home Front Command.

On Wednesday morning the Israeli Air Force targeted and hit two terrorists in separate locations in the northern Gaza Strip who were attempting to fire rockets into southern Israel.
Earlier on Wednesday, two mortar shells fired from Gaza exploded in open areas in the Eshkol Regional Council. No injuries were reported, but light damage was caused.

The mortar fire came after the IDF confirmed that a member of the terrorist group Islamic Jihad was killed in a car explosion in the Gaza Strip as a result of an IAF strike. An IDF statement said that the terrorist targeted in Rafah was involved in weapons smuggling and militant operations in Egypt’s Sinai from where gunmen snuck into Israel killing eight last week. Israel Radio reported that the terrorist killed in the strike was responsible for funding the Eilat attacks.

Palestinian news agency Ma’an said that the man killed was Ismail al-Asmar, a field commander in the Al-Quds Brigade, the Islamic Jihad’s military wing. A spokesman for a medical service run by Hamas said two other people were wounded after the car was targeted by IAF aircraft.

“Israel will pay a heavy price for this crime,” a statement by the Al-Quds Brigade said. source – JPost