OUTRAGE! Why Did The Main Stream Media Remain SILENT As Bombs Fell On Israel?

The Main Stream Media ignored the bombs as they fell over Israel. Not a link, not a photo, not even a whisper of the fact that 500,000 Israeli citizens... 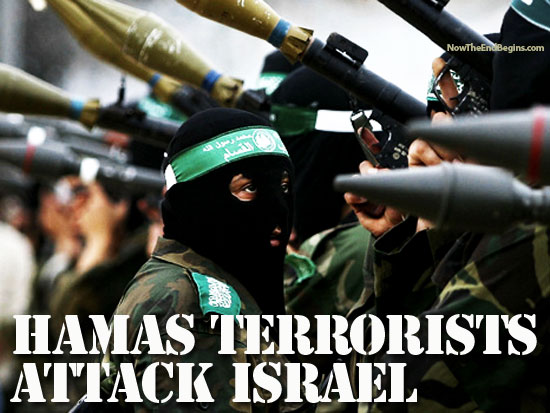 Hamas and Palestine don't want the land of Israel, they want each and every last Jew dead.
by Geoffrey Grider March 10, 2012
NOW THE END BEGINS SHARE:

NTEB asks why not one major news outlet covered the attack

Yesterday, for nearly one straight 24-hour news cycle, over 130 rockets were fired by Palestinian terrorists on the nation of Israel. Dozens of them exploded with 9 people being seriously hurt and one of those very badly injured. NTEB was first alerted to this news via the Israeli Defense Force blog site, which had video and photos of the onslaught. The Jerusalem Post also covered the story while it was happening. Then personal emails from friends of NTEB in Israel began to come in, verifying all the the IDF and JPost has reported. Naturally, NTEB ran with the story and had posted on it within 15 minutes of the first alert we received. Within an hour, our website had begun to get thousands of hits related to this story. Then came the weird part.

After we posted about the rockets falling over southern Israel, and the corresponding IAF airstrike in reply to the attacks, we took a quick survey over the ‘Net to see who else was running this important story. Surely Fox News would have it…surely the Drudge Report would add a link to it. (Drudge, we personally sent you this story last night twice. We are very disappointed in you.) To our astonishment, there was nothing. Not a link, not a photo, not even a whisper of the fact that 500,000 Israeli citizens spent the night in underground bomb shelters as the skies lit up with Palestinian rocket barrages. How could this be?

Hamas and Palestine don't want the land of Israel, they want each and every last Jew dead.

The bible says that in the end of time, ALL the nations of the world will come against Israel. Not just the Muslim nations but all of them. This include France, Spain, the UK, and yes, it also includes the United States of America. As we get closer and closer to the fulfillment of that prophecy and others just like it, we are seeing the world turning a blind eye to Israel. Any other country this would happen to and we would already be seeing the television commercials for telethons to raise money for relief efforts. But Israel? Bombs falling over Israel doesn’t even apparently rate a two paragraph mention on MSNBC, Fox News, Drudge, CBS, ABC, or any other major news service.

But here is what they are reporting at this moment (surprise!…not)

Just when you think this story couldn’t get any worse, hold on to your hat because it does. As we have told you, not one major news service has reported on the bombs that are still falling on Israel but they are reporting on something. Care to hazard a guess at what it could be? That’s right, you got it. They are reporting on Israel launching airstrikes on Gaza. Note the following from Fox News:

“GAZA CITY, Gaza Strip– The worst violence between Israel and the Gaza Strip in nearly a year entered its second day on Saturday, as Israeli aircraft killed 15 militants, according to Palestinian health officials.” source – Fox News 03.10.2012

So it would appear that making Israel the bad guy – yet again – is something the main stream media are all too happy to do. If you were to read the Fox story, it seems like Israel just randomly launched an airstrike on Gaza for no reason, and the 130+ rockets that Hamas is firing is justified retaliation. But it’s not. Israel was forced to launch an airstrike in the hopes of preventing the Muslim Brotherhood terrorists that were getting ready to attack them, but even an airstrike couldn’t do it. They attacked anyway.

“Dear Mr. Prime Minister Netanyahu: The nations of the world are against you. Do not expect their assistance in any meaningful way. Iran is moments away from building a nuclear weapon, and no, President Obama has no interest in stopping them from doing so. As soon as Iran gets just one nuclear bomb together, they will launch it at Israel. Count on it. Whatever you need to do to protect the nation and people of Israel, do it now. Do not wait. I will close this short note with where I started – the nations of the world are against you.” – NTEB Staff

ps – Now The End Begins is with you 100% and will continue to cover every bit of this story as it continues to unfold.

Soon He Himself will step in and fight for His people the Jews and for His land of Israel. We will close with this from the bible:

“For, behold, in those days, and in that time, when I shall bring again the captivity of Judah and Jerusalem, I will also gather all nations, and will bring them down into the valley of Jehoshaphat, and will plead with them there for my people and for my heritage Israel, whom they have scattered among the nations, and parted my land. Proclaim ye this among the Gentiles; Prepare war, wake up the mighty men, let all the men of war draw near; let them come up: Let the heathen be wakened, and come up to the valley of Jehoshaphat: for there will I sit to judge all the heathen round about.

The sun and the moon shall be darkened, and the stars shall withdraw their shining.

The LORD also shall roar out of Zion, and utter his voice from Jerusalem; and the heavens and the earth shall shake: but the LORD will be the hope of his people, and the strength of the children of Israel.” Joel 3