President Obama gave a speech yesterday where he decried the Oregon mass shootings, and then made a nearly 10 minute plea to take away America's guns. ... 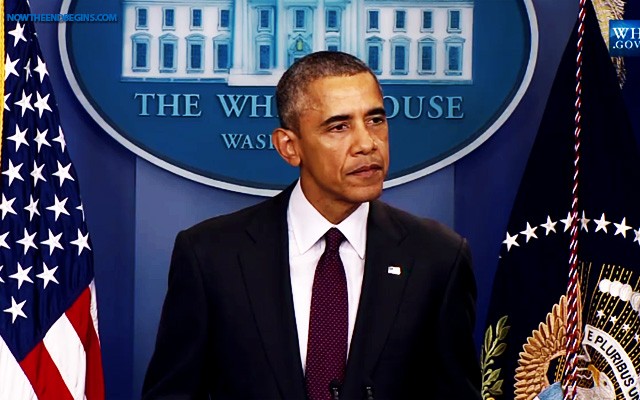 Look around you, Christian America, and you will see that the Obama government is against you.

“Then shall they deliver you up to be afflicted, and shall kill you: and ye shall be hated of all nations for my name’s sake.” Matthew 24:9 (KJV)

The man who gunned down nine people at an Oregon community college was enrolled in the class where the fatal shootings occurred, Douglas County Sheriff John Hanlin said Friday. Stacy Boylan, the father of Anastasia Boylan, who was wounded, said she told him the gunman, Chris Harper-Mercer, singled out Christians.

She said the gunman entered her classroom firing, told the professor teaching the class, “I’ve been waiting to do this for years,” and shot him point blank, Stacy Boylan said. While reloading his handgun, the man ordered the students to stand up and asked whether they were Christians, Boylan told her family.

“I will stand with the Muslims should the political winds shift in an ugly direction.” – from page 261 of the paperback edition of “The Audacity of Hope”.

“And they would stand up, and he said, ‘Good, because you’re a Christian, you’re going to see God in just about one second,’ ” Stacy Boylan told CNN, relaying his daughter’s account. “And then he shot and killed them.”

President Obama gave a speech yesterday where he decried the Oregon mass shootings, and then made a nearly 10 minute plea to take away America’s guns. But glaringly absent from his copious amounts of spewed words was any mention at all that the gunman specifically targeted Christians, and only Christians. Just two days earlier at the United Nations, he gave a speech where he warned that “intolerance towards Islam” would not be tolerated. Then, when Christians were targeted and killed for being Christian, he said nothing on their behalf. In doing so, the message he sent to the entire country was that Christians neither deserve nor will receive any special protection as Christians.

President Obama Oregon Full Speech. ‘Some How This Has Become Routine’

Look around you, Christian America, and you will see that the Obama government is against you. Just this week he said “we also have to say clearly that our religious freedom doesn’t grant us the freedom to deny our fellow LGBT Americans their constitutional rights.” Want to go to jail? Open a Christian bakery or flower shop. Where is the most unsafe place in America for babies? In their mothers wombs. The same number of people who died in 9/11 are killed in their mothers wombs in America every day. Where does Obama stand on abortion? He loves it….a lot.

9 dead Christian Americans, slaughtered in cold blood for their faith in Jesus Christ, and all Obama could say was “more gun control”. What Obama didn’t say spoke volumes more than what he did say, and the message he sent unmistakable. That the targeted murder of Christians rates no special mention and carries no special punishment. Open season on Christians.

Want to guess how his speech would have been different if it was 9 Muslims who were killed for being Muslims? Here’s a clue:

“I will stand with the Muslims should the political winds shift in an ugly direction.”  – from page 261 of the paperback edition of “The Audacity of Hope”.