President Barack Obama’s campaign slogan is springing to life in a surge of executive directives and agency rule-making that touch many of the affairs of government. ... 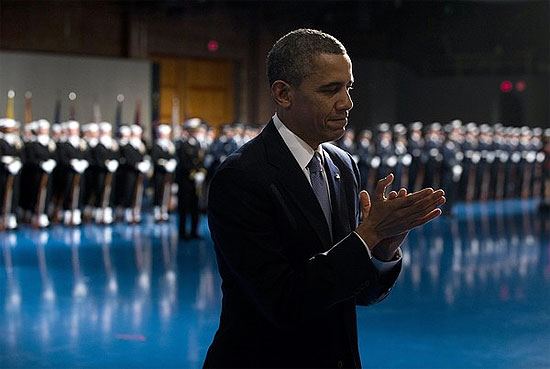 President Barack Obama’s campaign slogan is springing to life in a surge of executive directives and agency rule-making that touch many of the affairs of government. They are shaping the cost and quality of health plans, the contents of the school cafeteria, the front lines of future combat, the price of coal. They are the leading edge of Obama’s ambition to take on climate change in ways that may be unachievable in legislation.

Altogether, it’s a kinetic switch from what could have been the watchword of the Obama administration in the closing, politically hypersensitive months of his first term: pause. Whatever the merits of any particular commandment from the president or his agencies, the perception of a government expanding its reach and hitting business with job-killing mandates was sure to set off fireworks before November.

Since Obama’s re-election, regulations giving force and detail to his health care law have gushed out by the hundreds of pages. To some extent this was inevitable: The law is far-reaching and its most consequential deadlines are fast approaching.

The rules are much more than fine print, however, and they would have thickened the storm over the health care overhaul if placed on the radar in last year’s presidential campaign. That, after all, was the season when some Republicans put the label “death panel” (one that some have dubbed “over-the-top”) on a board that could force cuts to service providers if Medicare spending ballooned.

The new health law rules provide leeway for insurers to charge smokers thousands of dollars more for coverage. They impose a $63 per-head fee on insurance plans — a charge that probably will be passed on to policyholders — to cushion the cost of covering people with medical problems. There’s a new fee for insurance companies for participating in markets that start signing customers in the fall.

It’s clear from the varied inventory of previously bottled-up directives that Obama cares about more than “Obamacare.”

“I’m hearing we’re going to see a lot of things moving now,” Hilda Solis told employees in her last day as labor secretary. At the Labor Department, this could include regulations requiring that the nation’s 1.8 million in-home care workers receive minimum-wage and overtime pay.

After the terrorist attacks of Sept. 11, 2001, President George W. Bush approved a series of executive orders that created an office of homeland security, froze the assets in U.S. banks linked to al-Qaida and other terrorist groups, and authorized the military services to call reserve forces to active duty for as long as two years.

Bush’s most contentious move came in the form of a military order approving the use of the military tribunals to put accused terrorists on trial faster and in greater secrecy than a regular criminal court.

Obama also has wielded considerable power in secret, upsetting the more liberal wing of his own party. He has carried forward Bush’s key anti-terrorism policies and expanded the use of unmanned drone strikes against terrorist targets in Pakistan and Yemen.

When a promised immigration overhaul failed in legislation, Obama went part way there simply by ordering that immigrants brought illegally to the United States as children be exempted from deportation and granted work permits if they apply. So, too, the ban on gays serving openly in the military was repealed before the election, followed now by the order lifting the ban on women serving in combat. source – The Blaze