Obama Does Nothing While Libya Burns

The Gaddafi regime has issued a defiant warning that the "time for action" had arrived as a sustained military assault forced the defeat of Libyan rebels in the strategically... 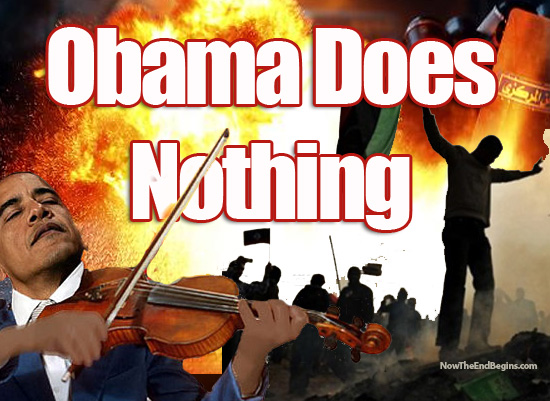 When America was the leader

Remember the days when America actually led the rest of the world? Well, that’s not today as Obama fiddles around with word parsing as we continue to watch Gaddafi torch his own people. Hmmm, and I thought that Liberals were so concerned with “human rights”?

Paralyzed by fear and inexperience, Obama simply does nothing.

The Gaddafi regime has issued a defiant warning that the “time for action” had arrived as a sustained military assault forced the defeat of Libyan rebels in the strategically important town of Zawiya and their retreat from Ras Lanuf. Amid squabbling among EU and NATO leaders on the eve of an emergency European summit on Libya in Brussels, Muammar Gaddafi’s son said that a new offensive would be launched within days.

The tough rhetoric from the Gaddafi regime – and its apparent success on the ground against the rebels – set the scene for a difficult emergency EU summit where leaders are expected to clash on the military and diplomatic response to the gravest crisis on their doorstep since the collapse of Yugoslavia. Fears among Libyan opposition groups that they will be defeated by the time Europe and the US agree on a course of action were heightened when:

• Nato was left paralysed as the US joined Germany in blocking the imposition of a no-fly zone supported by Britain and France. Robert Gates, the US defence secretary, said at a meeting of Nato defence ministers in Brussels that contingency planning for a no-fly zone would continue, before adding “that’s the extent of it”. source – Guardian UK