﻿So, now, we know. The two men who perpetrated Monday’s Boston Marathon terrorist attack are Islamic terrorists from Chechnya (Russia) who emigrated from there to the United States.... 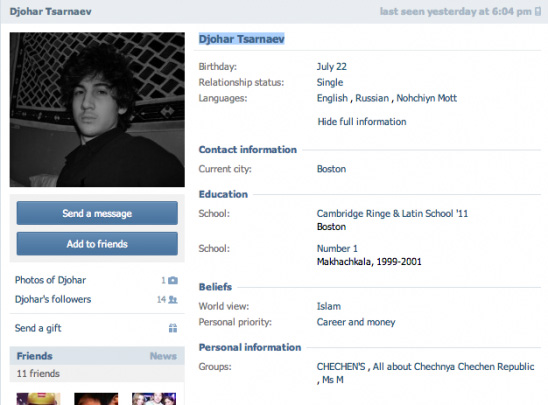 So, now, we know. The two men who perpetrated Monday’s Boston Marathon terrorist attack are Islamic terrorists from Chechnya (Russia) who emigrated from there to the United States. They were brothers. One, Tamerlan Tsarnaev, is dead, and the other, Dzokhar (or Dzhokhar or Djohar) Tsarnaev, is a fugitive, so the entire Boston area is shut down, as he might be armed with a suicide vest. I note that every single major news broadcast only refers to these guys as “Chechnyan” or “Chechen” terrorists, NOT Islamic terrorists, which is what they are. Remember all those people locked in a Russian theater–including lots of women and children–who were blown up by Chechnyan Islamic terrorists? Same people. Oh, and they are tied to Al-Qaeda and its worldwide network of nationalist Islamic terrorist groups. Same old jihad. Remember, THIS. IS. ISLAM.

Djohar Tsarnaev was a devout Muslim from Chechnya, Russia

The two of them came here several years ago and Tamerlan had a “Green Card” a/k/a “Legal Permanant Residence,” which means he basically had the green light to get U.S. citizenship. So, do we really need Marco Boob-io’s and his Senate Gangbang of Eight’s immigration amnesty bill so that more like the Tsarnaev Bros get “a pathway to citizenship”? Only if you’re a moron and want to see the end of America. These are the “DREAM Act” kids we’re told are “American like us in ever way except on paper,” to use Barack Obama’s words. Tsarnaev was raised here in American culture, coming here at age seven. And look how much he loved America.

He murdered and maimed hundreds of Americans, after apparently receiving some sort of paramilitary training along with his brother.

He learned this hate from his parents . . . just as hundreds of thousands of Muslim kids around America learn this hatred of this country from their parents, despite being given every opportunity, every freedom here. His online profile says his “worldview” is “Islam.” And we saw that worldview on display in practice, this week. click to read the full story on Debbie Schlussel