Many Grammy attendees were heard voicing their disgust for so-called artist Nicki Minaj. Blake Shelton was heard saying, “Nicki Minaj needs to crawl back inside the fiery pit she... 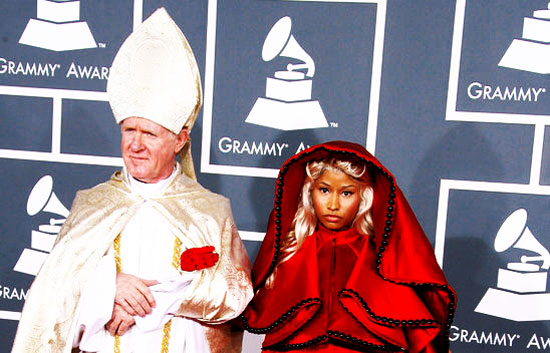 Another disturbing performance at the 53rd annual Grammy Awards

“And the woman was arrayed in purple and scarlet colour, and decked with gold and precious stones and pearls, having a golden cup in her hand full of abominations and filthiness of her fornication: And upon her forehead was a name written, MYSTERY, BABYLON THE GREAT, THE MOTHER OF HARLOTS AND ABOMINATIONS OF THE EARTH.” (Revelation 17:4-5)

Perhaps it was more of a revelation than a mockery what happened at the 53rd annual Grammy Awards when Nicki Minaj surprised many as she entered adorned in witches robes and with an actor dressed as the Pope.

Many Grammy attendees were heard voicing their disgust for so-called artist Nicki Minaj. Blake Shelton was heard saying, “Nicki Minaj needs to crawl back inside the fiery pit she came from… back to her father, Beelzebub.”

Simply evil in everything she does

Nicki’s disturbing performance at the 53rd annual Grammy Awards was a blatant attack on the Catholic church. No one is sure why she has such disdain for the Church but many actually believe she is simply evil and it reflected in everything she does and every song she sings and every performance she gives.

It might be easy to excuse Minaj as just using these type of theatrics simply to get attention and sell records. But many argue that is not the case here. Friends and family admit Minaj had embraced Satanism when she was a child around 14 or 15 years of age because her music is quite bad and most critics criticize her for having no talent whatsoever.

Other critics of Minaj believe that no one in their right mind, who does NOT worship Satan would play her whole career on “on all things Satanic” as Minaj does. This is no game. This is real. Many stars in the audience were heard murmuring such things as, “Minaj should definitely seek professional help. Normal people dont play like this”

If the stage was set as a Jewish Holocaust, or a black slavery set or some kind of mockery of Muhammad and Islam glorifying slave owners, there would be outrage. But because its the Catholic church that Minaj is mocking, somehow it’s allowed.

Never has a more evil rotten satanic performer been given the chance to grace the stage with such music greats and perform for so many top rated stars and have them sit there through it.

The Grammy show consisted of an exorcism, levitation and a demon possessed Minaj. She had an actor portray a priest attempting to exorcise her. Minaj believes she is the demon possessed spirit of someone called Roman.

That same actor priest had accompanied Minaj into the Grammy awards earlier wearing a Pope’s pontiff and robes. Many in the Christian community, not just the Catholic church are outraged that the Grammy producers would allow such blatant mockery and disrespect of the Church.

The Catholic church is outraged. Bill Donahue will be speaking out about it on the Monday morning talk shows, no doubt.

The argument is that no performer would be allowed to perform a show mocking the Holocaust or Black slavery, or the Muslim religion. And they are right.

Minaj’s home life growing up was traumatic and chaotic. Her parents apparently fought with each other a lot.

She developed an escapism which consisted of creating fictional characters (demons) she she would often live her life through them. In an interview with New York she said, “To get away from all my parent’s fighting, I would imagine being a new person. ‘Cookie’ was my first identity – that stayed with me for a while.

I went on to ‘Harajuku Barbie,’ then ‘Nicki Minaj’. Fantasy was my reality.”

With Minaj’s debut album she created another alter-ego named “Roman Zolanski”. Roman, the “Demon within Her” Was on full display Sunday in her shocking Grammy performance.

Minaj stated that in songs like “Bottoms Up” with Trey Songz it is not Minaj rapping, but instead Roman Zolanski. Nicki claims that Roman is her “twin sister”. She claims that he was born inside her, out of rage, and becomes him when she is angry.  She has also stated that, “Roman is a demon inside me”. – source – DividedStates

Bill Donahue of the Catholic League will be speaking out about it… or will he?

It will definitely be an interesting thing to watch for if the Catholic League’s President will really raise up the an outrage against this performance by Nicki Minaj. It may be important to note that Donahue brushed off Lady Gaga’s “Judas” music video last year as that she was “dancing on the line” but never actually crossed it.

Gaga, by the way, starred in her “Judas” video as Mary Magdalene envisioning a thorn-crowned Jesus. The video opens with Jesus wearing a crown and cornrows as the apostles fitted in leather head down a freeway on motorcycles. The rest of the video is full of religious imagery, including foot washing in a bathtub, crosses on Lady Gaga’s bra and plenty of gyrating. In her “Judas” video, Gaga plays fast and loose with Catholic iconography, and generates several untoward statements, but she typically dances on the line without going over it. Donohue called the video a “mess.” “Incoherent,” he continued, “it leaves the viewer more perplexed than moved. The faux-baptismal scene is a curious inclusion, as is her apparent fondness for the Jesus character.”
Though disappointing as this video was, we said that we weren’t to be going ballistic over the confused star’s latest contribution. If anyone thought otherwise, it is clear they haven’t a clue of what constitutes anti-Catholicism. – source – Catholic League