In a gutsy move, Newsweek has released the cover of their next issue, on the cover of which they depict President Obama with a rainbow halo and the title of 'The First Gay President'. The news-magazine, which hits stands Monday, is using the shock factor of labeling the straight, married, father-of-two President to draw attention to itself. Tina Brown, who heads the magazine and it's sister website The Daily Beast, is known for her appreciation of controversial covers to help boost public interest and sales.

In a gutsy move, Newsweek has released the cover of their next issue, on the cover of which they depict President Obama with a rainbow halo and the title of ‘The First Gay President’. 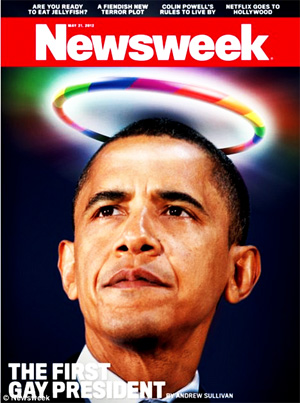 Controversial: Newsweek released their cover early, likely hoping to drum up attention for their next issue and their same-sex marriage coverage

The news-magazine, which hits stands Monday, is using the shock factor of labeling the straight, married, father-of-two President to draw attention to itself. Tina Brown, who heads the magazine and it’s sister website The Daily Beast, is known for her appreciation of controversial covers to help boost public interest and sales.

“Because that, when they knew God, they glorified him not as God, neither were thankful; but became vain in their imaginations, and their foolish heart was darkened. Professing themselves to be wise, they became fools,…And likewise also the men, leaving the natural use of the woman, burned in their lust one toward another; men with men working that which is unseemly, and receiving in themselves that recompence of their error which was meet.” Romans 1:21,27 (KJV)

After Time magazine went with a cover shot of a young blonde mother breastfeeding her 3-year-old boy, Ms Brown is said to have taken it in stride, saying ‘let the games begin!’

The article accompanying the cover was written by the news magazine’s regular blogger, Andrew Sullivan, who is an openly gay self-titled conservative political pundit.

‘When you step back a little and assess the record of Obama on gay rights, you see, in fact, that this was not an aberration. It was an inevitable culmination of three years of work,’ Mr Sullivan said in a statement about the article.

There was little doubt that Newsweek would be covering the President’s historic announcement that he supports same-sex marriage after he had a sit-down television interview confirming what many already believed to be the case.

This was, however, the first time that a sitting President had done so, and the magazine asserts that such a move was a calculated one that had been thoroughly planned.

‘It’s easy to write off President Obama’s announcement of his support for gay marriage as a political ploy during an election year. But don’t believe the cynics,’ representatives from the news magazine told Politico in a statement about the article.

The move, thought to be a misstep as he made his opinion known before Mr Obama publicly declared his, was criticized by many within the administration and outside of the White House.

‘Would I have preferred to have done this in my own way, in my own terms, without I think, there being a lot of notice to everybody? Sure,’ Mr Obama said in the ABC. ‘But all’s well that ends well.’

On the day of the President’s interview, Mr Biden is said to have had a private meeting in the Oval Office where in he apologized for his overstep.

Republicans, the vast majority of whom are against gay marriage, said that Mr Obama simply made his historic announcement in an effort to gain support among liberal voters in the lead up to the general election.

‘While President Obama has played politics on this issue, the Republican Party and our presumptive nominee Mitt Romney have been clear,’ Republican national committee chairman Reince Priebus said in a statement.

‘We support maintaining marriage between one man and one woman and would oppose any attempts to change that.’ source – Daily Mail UK