The confiscation of guns and gun permits has apparently started in some form in New York State. ... 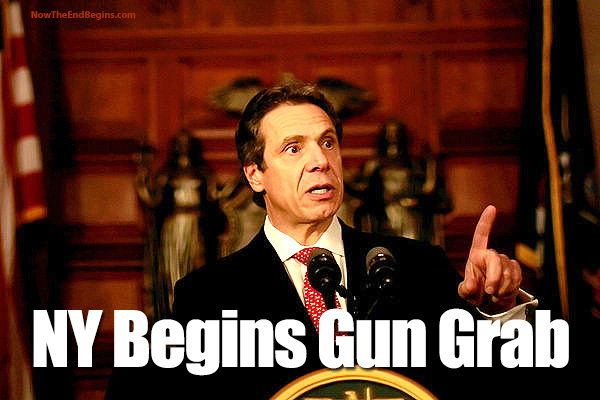 Despite promises from the president and a host of other politicians who are pushing for more gun control that nobody is coming for your guns, the confiscation of guns and gun permits has apparently started in some form in New York State.

One attorney representing several people who have been forced to surrender their guns spoke with TheBlaze and alerted us to some disturbing facts:

How did confiscation start happening so quickly? Apparently the gun grabbing was triggered by something inside the NY SAFE Act — New York’s new gun law — that has a provision apparently mandating confiscation of weapons and permits if someone has been prescribed psychotropic drugs.

On April 1st, a legal gun owner in upstate New York reportedly received an official notice from the state ordering him to surrender any and all weapons to his local police department. The note said that the person’s permit to own a gun in New York was being suspended as well. The gun owner contacted attorney Jim Tresmond (a specialist in gun laws in New York) and the two visited the local police precinct.

Mr. Tresmond reportedly went into the precinct and informed the officers that his client, waiting in the parking lot, was coming in to voluntarily surrender his weapons as requested. The local police were aware of the letter because they had already been contacted by the State Police. Apparently, if people do not respond to the initial mailing, local law enforcement is authorized to visit the gun owner at their home and demand the surrender of the firearms. In this case, the gun owner followed the request as written. The guns and permits were handed over and a receipt given to the client.

After the guns were turned over, a request for a local hearing was filed and the gun owner is expecting to have his Second Amendment rights restored. But there is more to this story.

In our conversation with lawyer Jim Tresmond, we learned that this client, who has never had a problem with the law — no criminal record and or violent incidents on record — did have a temporary, short term health issue that required medication. But how were his client’s private medical information accessed by the government? This appears to be a violation of HIPAA and Health Information Privacy policies at HHS.gov. If it is declared a violation, this becomes a civil rights issue.

Some claim that a broad interpretation of this statement from HIPAA might allow the government to have instant access to the medical records and gun ownership records of anyone who is prescribed psychotropic drugs.

A major goal of the Privacy Rule is to assure that individuals’ health information is properly protected while allowing the flow of health information needed to provide and promote high quality health care and to protect the public’s health and well being.

That short phrase, “protect the public’s health and well being” is probably going to be cited as the reason governments can require notification of any gun owner who is prescribed a class of drugs used to treat Depression and Anxiety known as SSRI ( Selective Serotonin Reuptake Inhibitors).

The Mental Health Law provision of the SAFE Act claims

The NY SAFE Act is designed to remove firearms from those who seek to do harm to themselves or others. This means keeping the minority of individuals with serious mental illness who may be dangerous away from access to firearms. This law should not dissuade any individual from seeking mental health services they need.

The law is clear on what it expects:

MHL 9.46 requires mental health professionals to report to their local director of community services (“DCS”) or his/her designees when, in their reasonable professional judgment, one of their patients is “likely to engage in conduct that would result in serious harm to self or others.”

The man who was asked/directed to turn over his guns reportedly did not exhibit any signs of violent or dangerous behavior. According to his attorney, the man’s doctor did not report any danger to the authorities. So, who did report it?

Also known as MHL 9.46, the law talks about who is supposed to report on mental health risks and which patients qualify:

In addition to what Mr. Tresmond called “the laughable diminution of our rights,” the lawyer speculated about additional unintended consequences of releasing this confidential patient information to law enforcement.

In an effort to learn how many permits and guns have been rescinded due to this medical exception, TheBlaze has made several attempts to contact the Erie County office over pistol permits where this one incident originated. We have yet to be connected with a real person who can answer these questions.

We have also reached out to the Albany office of the New York State Police, but no official response has been received. Mr. Tresmond has also agreed to keep us posted on his client’s efforts to have his Second Amendment rights restored and get back his guns. source – The Blaze