In fact, a review of mainstream outlets, as well as other outlets associated with liberal and conservative audiences, shows that only conservative sites feature the highly misleading, subjective analysis. Several conservative-leaning outlets like TheDC are “vetted,” while equally partisan sites like Vox, ThinkProgress, Slate, The Huffington Post, Daily Kos, Salon, Vice and Mother Jones are spared.

Google, the most powerful search engine in the world, is now displaying fact checks for conservative publications in its results. No prominent liberal site receives the same treatment.

EDITOR’S NOTE: The new ‘fact check’ feature from Google only seems to target Christians and Conservatives, in the same way that the new ‘fake news’ review feature on Facebook only seems to result in suspension bans by Christian and Conservative posters. Nearly every single social media organization is run by Liberals, and most of them are quite far Left. Just like Fox News rose up 20 years ago to level the playing field in the Liberal-controlled old media, so now we need a Conservative group to come up with the next big must-have social media app.

And not only is Google’s fact-checking highly partisan — perhaps reflecting the sentiments of its leaders — it is also blatantly wrong, asserting sites made “claims” they demonstrably never made.

When searching for a media outlet that leans right, like The Daily Caller (TheDC), Google gives users details on the sidebar, including what topics the site typically writes about, as well as a section titled “Reviewed Claims.”

Vox, and other left-wing outlets and blogs like Gizmodo, are not given the same fact-check treatment. When searching their names, a “Topics they write about” section appears, but there are no “Reviewed Claims.”

In fact, a review of mainstream outlets, as well as other outlets associated with liberal and conservative audiences, shows that only conservative sites feature the highly misleading, subjective analysis. Several conservative-leaning outlets like TheDC are “vetted,” while equally partisan sites like Vox, ThinkProgress, Slate, The Huffington Post, Daily Kos, Salon, Vice and Mother Jones are spared.

Occupy Democrats is apparently the only popular content provider from that end of the political spectrum with a fact-checking section.

Big name publications like The New York Times, The Washington Post, and the Los Angeles Times are even given a column showcasing all of the awards they have earned over the years. 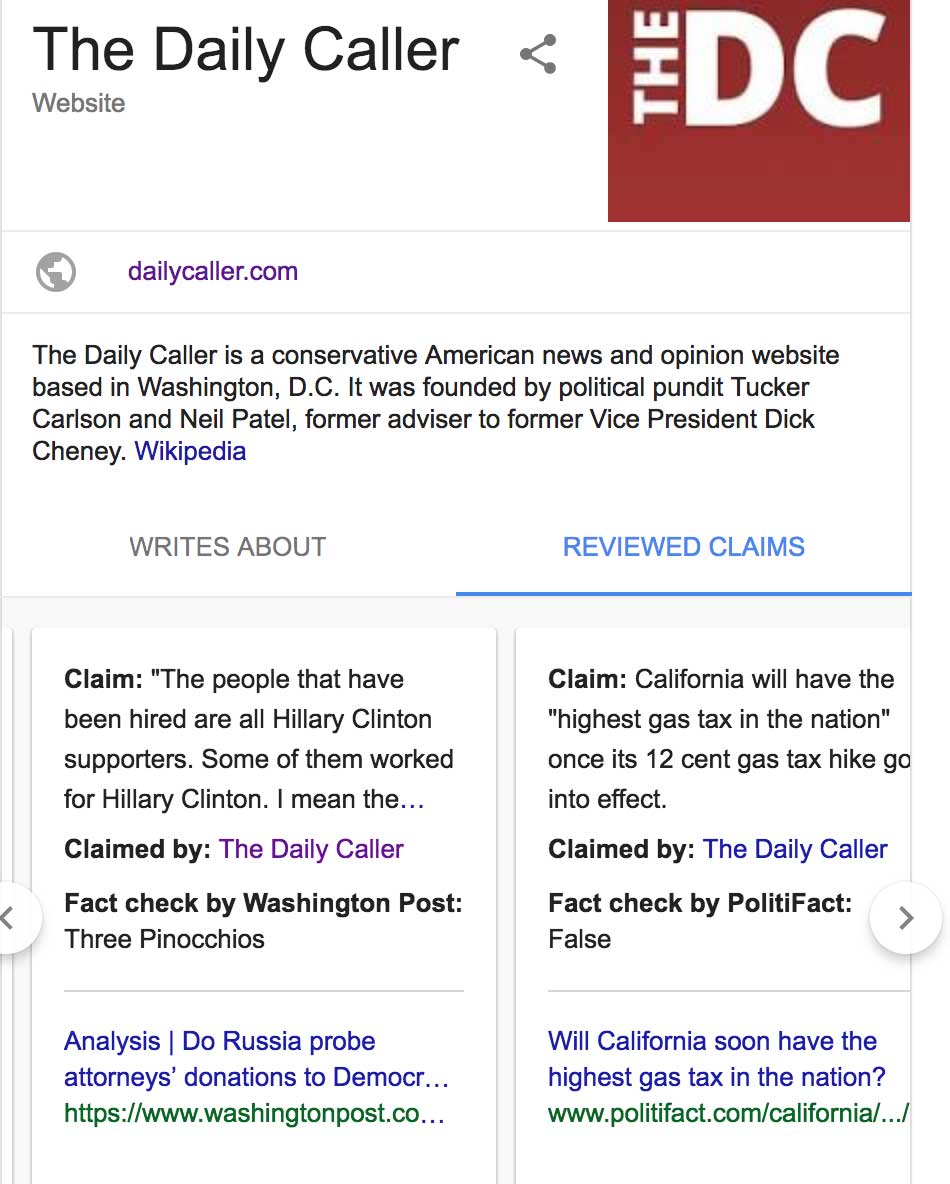 This Robert Mueller ‘fact check’ is a case in point for Google’s new feature.

Ostensibly trying to sum up the crux of the post, the third-party “fact-checking” organization says the “claim” in a DC article that special Counsel Robert Mueller is hiring people that “are all Hillary Clinton supporters” is misleading, if not false.

The problem is that TheDC’s article makes no such claim. Their cited language doesn’t even appear in the article. Worse yet, there was no language trying to make it seem that the investigation into the Trump administration and Russia is entirely comprised of Clinton donors. The story simply contained the news: Mueller hired a Hillary Clinton donor to aid the investigation into President Donald Trump.

Still, the Washington Post gave the claim, which came from Trump himself, its official “Three Pinocchios” rating. The method applies to several other checks. Claims concocted or adulterated by someone outside the TheDC are attributed to TheDC, in what appears to be a feature that only applies to conservative sites.

Examples of such misattribution and misrepresentation are aplenty. For instance, using Snopes.com, an organization with highly dubious fact-checking capabilities, Google’s platform shows an article by TheDC to have a so-called “mixture” of truth. source