Netanyahu announced the establishment of the study circle on Friday at a ceremony marking 30 days since the passing of his father-in-law, Shmuel Ben-Artzi. The study group will be... 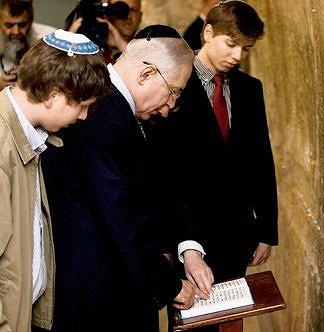 Netanyahu declares the Bible to be the "Book of All Books!"
by Geoffrey Grider December 10, 2011
NOW THE END BEGINS SHARE:

The coming restoration of the Jews

“For I would not, brethren, that ye should be ignorant of this mystery, lest ye should be wise in your own conceits; that blindness in part is happened to Israel, until the fulness of the Gentiles be come in. And so all Israel shall be saved: as it is written, There shall come out of Sion the Deliverer, and shall turn away ungodliness from Jacob: For this [is] my covenant unto them, when I shall take away their sins.” Romans 11:25-27

Netanyahu declares the Bible to be the "Book of All Books!"

Netanyahu announced the establishment of the study circle on Friday at a ceremony marking 30 days since the passing of his father-in-law, Shmuel Ben-Artzi. The study group will be named after Ben-Artzi, a noted poet and Bible teacher. Both Ben-Gurion and Begin, when they each served as prime minister, hosted regular Bible study groups.

Netanyahu said he was establishing the class to perpetuate love of the Bible.

Last Sunday, at a ceremony in Sde Boker marking the 38th anniversary of Ben-Gurion’s death, Netanyahu recalled the first premier’s Bible study class, saying that his father-in-law used to attend.

“Ben-Gurion understood that the Book of Books is our mandate for our country, as he said in that same unforgettable statement before the Peel Commission in 1936,” Netanyahu said. “He viewed the Bible as the wondrous story of the Jewish people, the unique spiritual, cultural and historic heritage of our people, and also as one of the cornerstones of all of human culture.” JPost