Prime Minister Benjamin Netanyahu, at a meeting in Amman last week, called on Jordan’s king and the Islamic foundation that administers the Temple Mount to exercise their authority to... 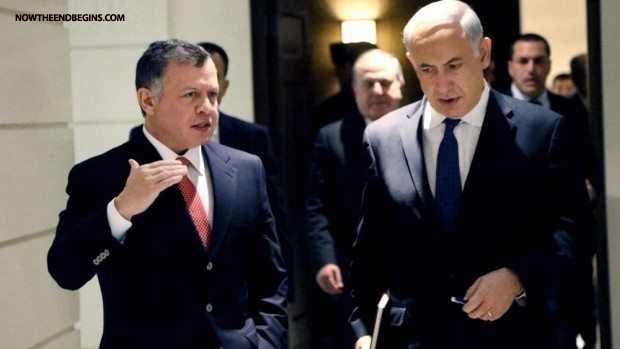 Prime Minister Benjamin Netanyahu, at a meeting in Amman last week, called on Jordan’s king and the Islamic foundation that administers the Temple Mount to exercise their authority to prevent disturbances at the holy site, according to details revealed in an Israeli report Monday

During the Thursday meeting, attended by Netanyahu and US Secretary of State John Kerry, Jordan’s King Abdullah II expressed dissatisfaction regarding the Jewish Knesset members who had visited the Temple Mount in recent weeks, telling Netanyahu that their presence was inconsistent with the prime minister’s public assurances of maintaining the status quo of the compound, known to Muslims as the Haram al-Sharif.

Under the terms of the Israel-Jordan peace treaty, the Temple Mount remains under Jordanian custodianship through the Waqf authorities, who maintain administrative charge of the holy site.

In response, Netanyahu reportedly told the king he was unable to restrict the movements of MKs, according to news site NRG. Abdullah, however did acknowledge President Reuven Rivlin and Netanyahu’s recent requests that right-wing MKs refrain from visiting the contested holy site, and noted the decline in such visits over the last week, the Hebrew daily reported.

Netanyahu reiterated his commitment to Abdullah and Kerry that Israel has no intention of changing the delicate status quo at the Temple Mount, including leaving in place a controversial Israeli policy that bans prayer by non-Muslim visitors.

According to NRG, Netanyahu reminded Abdullah that Jordan maintains administrative control of the holy site, and encouraged the Hashemite Kingdom to take a larger role in restoring quiet. Netanyahu also pointed out that the recent clashes were carried out with the full knowledge of the Jerusalem Waqf.

Under the terms of the Israel-Jordan peace treaty, the Temple Mount remains under Jordanian custodianship through the Waqf authorities, who maintain administrative charge of the holy site.

The site — the holiest in Judaism, and the third-holiest in Islam — has been a source of increased tensions between Israelis and Palestinians, which have led to a number of violent clashes, four terror attacks and an attempted assassination of a Temple Mount activist in just under a month.

Palestinian Authority President Mahmoud Abbas, who was invited to attend the talks discussing the recent surge in violence in Jerusalem, refused to participate due to Netanyahu’s presence, according to the report, which cited an anonymous Palestinian source who spoke to the London-based Arabic daily Al-Quds al-Araby.

Jordan has taken a tough stance toward Israeli presence on the Temple Mount, and recalled its ambassador to Israel two weeks ago after an incident in which Israeli police entered the Al-Aqsa Mosque in the Temple Mount compound.