A fourth death is reported after teacher and his two children died in a shooting attack on the Ozar Hatorah school in Toulouse, southwestern France, Monday, March 19.... 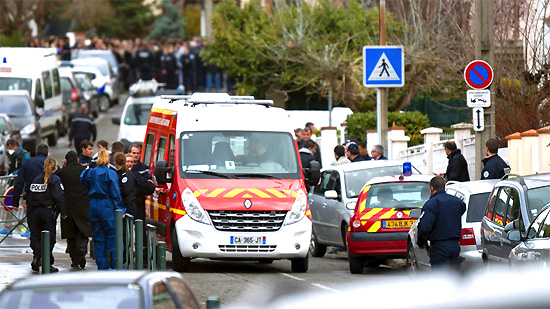 A fourth death is reported after teacher and his two children died in a shooting attack on the Ozar Hatorah school in Toulouse, southwestern France, Monday, March 19.

Several more people were injured, including two children in serious condition. A motorcyclist dressed in black opened fire from two pistols, 9mm and a 11.43mm, as they were dropped off outside the school Monday morning, March 19. Witnesses say he then entered the school yard and sprayed more fire on children.

President Nicolas Sarkozy is flying to the schene of the attack after ordering security boosted at all Jewish schools and institutions in France. Toulouse police have barred photos of the school. They are investigating links with a recent attack by a black-garbed motorcyclist answering to the same description who shot dead three French parachutists and wounded a fourth at the nearby town of Montauban before escaping.  They had all served in Afghanistan. The two attacks point to an extremist Muslim individual or group dedicated to striking “anti-Muslim” targets.

France has Europe’s largest Jewish community, estimated at up to 700,000 people. source – DEBKA