Around 20 Syrian Muslim migrants have filed a case against the Berlin state Government demanding immediate access to shelter and benefits after waiting for more than a week to... 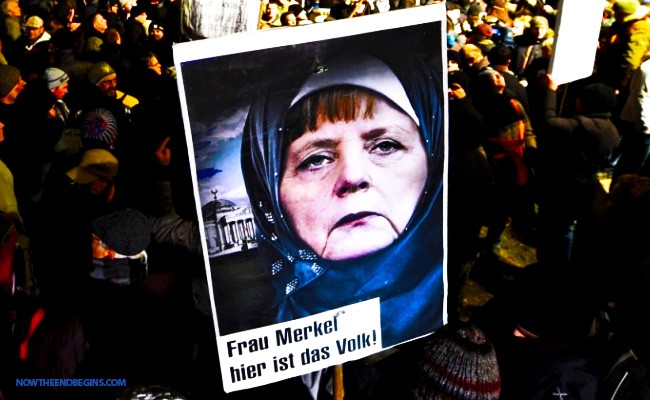 The Muslim takeover of Germany is well underway, and just a few months into the migrant invasion they are doing exactly what we said they would do when it all started. It is mind boggling to imagine a world where leaders of some of the most powerful countries on Earth are stupid enough to let all these Muslims in. A ten year old could look at the facts and tell you not to do it, and yet here we are. England, Germany and many other Eu nations are beginning to collapse under the weight of the Muslim flood.

Tensions are high in Celle, Germany after hooded migrants were seen with sticks and pipes, shouting ‘Allahu Akbar’ in a street rally.

Around 20 Syrian Muslim migrants have filed a case against the Berlin state Government demanding immediate access to shelter and benefits after waiting for more than a week to be registered by the authorities.

The irony of this is that Germany who started two World Wars for world domination are now themselves being dominated by Muslims in a battle they cannot possible win.

It comes as serious splits emerged in Angela Merkel’s Government over how to divide economic migrants from genuine refugees fleeing war-torn countries.

Hundreds of asylum seekers are still waiting to be registered due to huge backlogs at the city’s main refugee centre. More than 170,000 Muslim migrants flooded into Europe last month alone as the continent’s unprecedented refugee crisis continues to spiral out of control.

A school in Lübeck, Germany, included “practical work experience” at a local asylum center into a week activities. The plan angered parents opposed the idea of their children changing linen on refugees’ beds, helping to cook food and sorting clothes.

This is what it looks like when the Muslim migrants come to your town.
An extract from a letter was posted in Facebook by a mother who obtained it from a friend whose son received it at school. Initially, the text sparked a mixture of bewilderment and disbelief in social media, but after a local newspaper got in touch with Schleswig-Holstein authorities, they confirmed the document was real.

The post got over 2,000 shares and more than 600 comments most of them asking why the refugees can’t take care of them themselves.

The Kiel Ministry of Education has made it clear that starting this week, 13-14-year-old eighth-graders from one school in the city of Lübeck have been putting fresh linen on refugees’ beds, helping out in the kitchen of the asylum seekers’ center and sorting clothes collected for the migrants. The chores last from 8:30am till 1:30pm.

With the world’s eyes on the more than half-million migrants flooding into Europe this year, France is finally beginning to take notice of the filthy Calais camp and the plight of those forced to bide their time in what they call “the jungle” — a network of makeshift shelters without water or other basic amenities.

With winter approaching, the government is sending a medical mission to Calais on Wednesday to evaluate the situation because “health protection is a fundamental right for each person on French territory,” said a statement signed by the Interior and Health ministries. 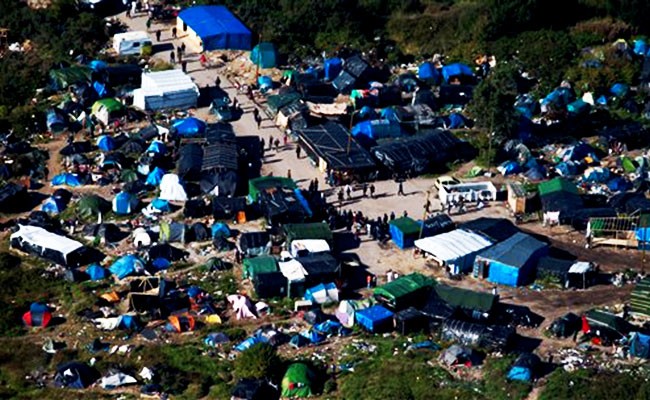 Aerial view of the migrant camp known as the New Jungle Camp, near Calais, northern France. With the world’s eyes on the more than half-million migrants flooding into Europe this year, France is finally beginning to take notice of the filthy Calais camp and the plight of those forced to bide their time in what they call “the jungle”, a network of makeshift shelters without water or other basic amenities. (AP Photo/Michel Spingler, File)

The French and British governments have focused on securing the Calais port and the Eurotunnel freight and passenger train site to keep migrants from sneaking rides, turning those sites into fortresses with towering fences topped with barbed wire.

The reinforced security has increased risks. Since June 26, 14 migrants have been killed, including a Syrian electrocuted Sept. 17 at the Eurotunnel site. The latest victim identified was a Moroccan who tried to swim to a ferry.

Britain signed an accord with Paris in 2003 designed to keep migrants in France, and the French government has bulldozed smaller camps in the past. But migrants keep coming. Up to 4,000 people languish sometimes for months in the Calais camp or in nearby towns.

The intense desire to reach Britain and a palpable sense of desperation inside the camp feed the risk-taking.

“Some people die here, some people break legs,” a 19-year-old from Darfour, in Sudan, Mustafa Ali, said recently, assessing his situation after a life-threatening journey to reach Calais. “This jungle is not good.”