On January 16, over 3000 gathered outside parliament in Amman to protest the failing economic policies of the Jordanian government and more protests are planned for Friday by the... 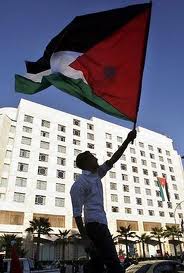 Who’s next? Ruling Arab governments in both the Middle East and Africa remain on edge, just waiting to see if their country is up to host the next major uprising. There is unrest in Egypt, Libya, Algeria, Sudan and Jordan, and pressure continues to mount. Disenfranchised citizens are fed up with having no jobs and unstable economies due to corrupt leadership, and it appears that the people have had enough. Emboldened by the recent overthrowing of Tunisian leadership, protests are gaining strength and there is no end in sight for what could potentially be multiple revolutions ahead.

Raised tensions against King Abdullah II’s monarchy are of particular concern as Jordan shares its western border with Israel, and any added instability in the region creates an even more complex setting for the Jewish nation. On January 16, over 3000 gathered outside parliament in Amman to protest the failing economic policies of the Jordanian government. More protests are planned for Friday by the Islamic Action Front, whose leader Hamza Mansour claims that the November parliamentary elections were rigged.

The Islamic Action Front – the political arm of the Muslim Brotherhood and the chief opposition party to the government – is leading a movement to censure the monarchy over rising prices for foodstuffs and fuel.