Vodafone has unveiled the next ‘revolution’ in smartphones that will see shoppers use their handsets instead of cash or cards at the checkout. A special chip called a 'tag'... 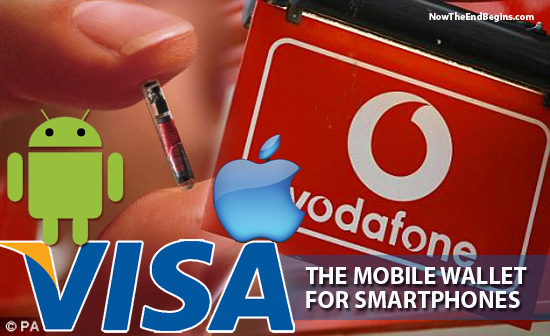 It's the latest and greatest bit of technology designed to further increase our dependence on computers, and to contimue to blur the line between human and machine.
by Geoffrey Grider February 27, 2012
NOW THE END BEGINS SHARE:

Drawing closer to the mark of the beast

RELATED STORY: Click here to read about the Mark of the Beast…

Vodafone has unveiled the next ‘revolution’ in smartphones that will see shoppers use their handsets instead of cash or cards at the checkout.

The mobile phone giant’s partnership with Visa will allow users to pay for goods or services from the autumn with a wave or tap of their smartphone – in the same way Oyster cards are used on London’s public transport.

It's the latest and greatest bit of technology designed to further increase our dependence on computers, and to contimue to blur the line between human and machine.

The service, which acts as a mobile wallet, will be available on Near Field Communications-enabled smartphones using a form of mobile payment technology called Visa payWave mobile.

A special chip called a ‘tag’ is planted in phones. Using near field communications (NFC) technology, details of the purchase are transmitted wirelessly to a central data bank and logged on your credit card file. For purchases over £15, users must punch in a PIN number.

The system began trials last summer in New York and San Francisco and is already used for bus trips in China and for buying cinema and theatre tickets in India.
While consumers can simply swipe their phone at a payment terminal to pay for less expensive items such as newspapers or coffees, they will be asked to enter a pin code for purchases of £15 or more.

Vodafone chief executive Vittorio Colao said this new method of payment represents ‘the next stage of the smartphone revolution’ which offered customers ‘speed, simplicity and convenience’.

He said: ‘Our mobile wallet will be open to any service provider and we are committed to enable all partners to provide our joint customers the richest service portfolio possible.’

Visa said the service has ‘the potential to transform the way people pay and get paid the world over’.

He said: ‘Visa’s future of payments initiative is more than just a promise: these services are real, tangible and coming to the mainstream consumer market in the very near future.’

Industry analysts said the momentum for mobile payments is ‘slowly but surely growing’.

Paul Lambert, senior analyst at Informa Telecoms & Media, said: ‘As operators and customers’ allegiance to them are coming under relentless attack from internet companies, making sure consumers identify with the Vodafone brand may go some way to improving customer loyalty – if the service works well from a end-to-end perspective.

‘Visa, meanwhile, will benefit from what it expects will be rapid adoption of the service, using as it will its underlying infrastructure and network of merchants.’

Other companies are also getting a foothold in the market, with Barclays having recently launched its Pingit service. This is an app that allows customers to send and receive payments using Apple or Android phones. source – Daily Mail UK