Apple and Google will introduce a pair of iOS and Android APIs in mid-May and make sure these health authorities’ apps can implement them. During this phase, users will still have to download an app to participate in contact-tracing, which could limit adoption. But in the months after the API is complete, the companies will work on building tracing functionality into the underlying operating system, as an option immediately available to everyone with an iOS or Android phone.

Apple and Google announced a system for tracking the spread of the new coronavirus, allowing users to share data through Bluetooth Low Energy (BLE) transmissions and approved apps from health organizations.

The nascent partnership between Apple and Google will use contact tracing software, first in an app voluntarily downloaded, but then it will be built into the operating system software of evert iPhone and Android on the face of the earth. Ready yet to all hold hands by the campfire, make some s’mores and sing Kumbaya? You better be. Mark Of The Beast on deck.

“And he causeth all, both small and great, rich and poor, free and bond, to receive a mark in their right hand, or in their foreheads: And that no man might buy or sell, save he that had the mark, or the name of the beast, or the number of his name. Here is wisdom. Let him that hath understanding count the number of the beast: for it is the number of a man; and his number is Six hundred threescore and six.” Revelation 13:16-18 (KJB)

And thus tightens the net around the people of the whole earth, that great and terrible Internet on which the entire world is run. Oh, what’s that? You didn’t know that the WWW is the platform of the coming Mark of the Beast system? What? nobody told you that the numeric value of the letter ‘W’ in the Hebrew alphabet is ‘6’? The letter ‘W’ in Hebrew is ‘Vav’ and it is the 6th letter in the Hebrew alphabet. Mind. Blown.

Wakey-wakey, little ones, your house is on fire, time to fly. Flight #777 on Titus213 Airlines has engines on and doors closing. Webs are made to catch things, don’t let it catch you.

FROM THE VERGE: The new system, which is laid out in a series of documents and white papers, would use short-range Bluetooth communications to establish a voluntary contact-tracing network, keeping extensive data on phones that have been in close proximity with each other. Official apps from public health authorities will get access to this data, and users who download them can report if they’ve been diagnosed with COVID-19. The system will also alert people who download them to whether they were in close contact with an infected person.

Apple and Google will introduce a pair of iOS and Android APIs in mid-May and make sure these health authorities’ apps can implement them. During this phase, users will still have to download an app to participate in contact-tracing, which could limit adoption. But in the months after the API is complete, the companies will work on building tracing functionality into the underlying operating system, as an option immediately available to everyone with an iOS or Android phone. 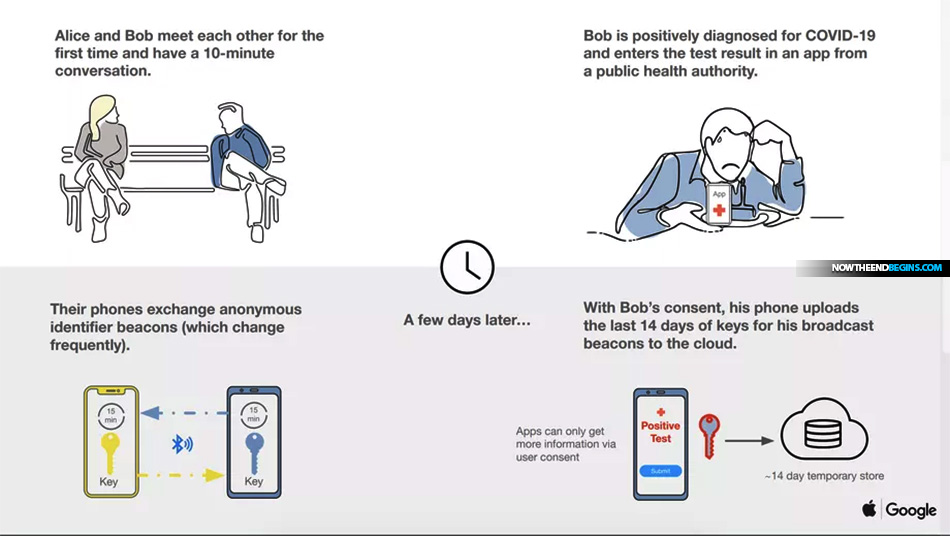 Contact tracing — which involves figuring out who an infected person has been in contact with and trying to prevent them from infecting others — is one of the most promising solutions for containing COVID-19, but using digital surveillance technology to do it raises massive privacy concerns and questions about effectiveness. Earlier this week, the American Civil Liberties Union raised concerns about tracking users with phone data, arguing that any system would need to be limited in scope and avoid compromising user privacy.

JOHN MACARTHUR IS DEAD WRONG SAYING THAT TRIBULATION SAINTS CAN TAKE THE MARK OF THE BEAST AND STILL BE FORGIVEN AND GO TO HEAVEN, THEY CAN’T

Unlike some other methods — like, say, using GPS data — this Bluetooth plan wouldn’t track people’s physical location. It would basically pick up the signals of nearby phones at 5-minute intervals and store the connections between them in a database. If one person tests positive for the novel coronavirus, they could tell the app they’ve been infected, and it could notify other people whose phones passed within close range in the preceding days.

The system also takes a number of steps to prevent people from being identified, even after they’ve shared their data. While the app regularly sends information out over Bluetooth, it broadcasts an anonymous key rather than a static identity, and those keys cycle every 15 minutes to preserve privacy. Even once a person shares that they’ve been infected, the app will only share keys from the specific period in which they were contagious.

Crucially, there is no centrally accessible master list of which phones have matched, contagious or otherwise. That’s because the phones themselves are performing the cryptographic calculations required to protect privacy. The central servers only maintain the database of shared keys, rather than the interactions between those keys. READ MORE

Contact tracing is something you are going to hear a lot about as our lockdown continues, time for all of us to learn what contact tracing is. Short answer? It’s a digital surveillance system. Surprised?