NTEB field correspondent Susan Ryan Stotesbury, reporting in from the largely liberal Austin, Texas area, took this shot while waiting to get in line to order lunch at Chick-fil-a... 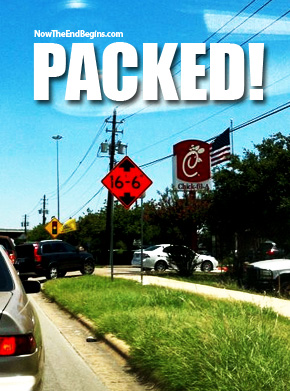 Live shot from Austin Texas where it seems like everyone is eating chicken today.
by Geoffrey Grider August 1, 2012
NOW THE END BEGINS SHARE:

CLICK HERE to read stories from our Chick-Fil-A archive…

Just two weeks ago, Chick-fil-A was a fast-food restaurant best known for chicken sandwiches and cross-cut fries. Now the chain is known for much more, chiefly its opposition to gay marriage.

Live shot from Austin Texas where it seems like everyone is eating chicken today.

“We are closing in on 500,000 attendees for Chick fil-A Appreciation day,” Huckabee said on his Facebook page this week, urging other like-minded individuals to continue to get the word out about the counter-protest.

Roger S. Oldham said he never anticipated this level of controversy. Oldham, a representative for the Baptist Press, a news service dedicated to Christian Baptist news, said the news service picked up and published what seemed to be a fairly routine story in mid-July.

It was a profile of Dan Cathy, president of the popular fast-food chain that proudly abides by Bible-based principals. (It is, for example, closed on Sundays.)

Cathy took the opportunity of the interview to proclaim his — and his company’s — opposition to gay marriage. “Guilty as charged,” Cathy said, adding that Chick-fil-A supports “the biblical definition of the family unit.” source – LA Times

Now The End Begins field correspondent Susan Ryan Stotesbury, reporting in from the largely liberal Austin, Texas area, took this shot while waiting to get in line to order lunch at Chick-fil-a today. Susan said that the line was out into the street, and bible-believing Christians were everywhere.