When you call the Michigan Public Assistance office you are told to “Press 1 for English. Press 2 for Spanish, or Press 3 for Arabic”... 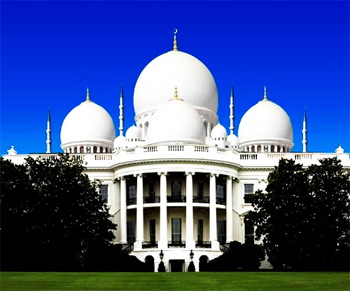 A Sharia America in the making

Slowly, but steadily, the state of Michigan has been turning into a Sharia-compliant haven for the Muslim world. The culture shift that has taken place is mind-boggling. We reported about a week ago that Muslim-dominated Detroit is now America’s most crime-filled city. Even the police offer you no hope of safety when you enter in there:

This could easily be the cover photo from ‘Dreams From My Real Father”. A Sharia United States is the Obama family business.

“The men and women of the Detroit Police Department believe the city is too dangerous to enter, and they want citizens to know it. Detroit Police Officer Association (DPOA) Attorney Donato Iorio said officers are holding the “Enter At Your Own Risk” rally at 3:30 p.m. Saturday in front of Comerica Park to remind the public that the officers are overworked, understaffed, and at times, fearful for their lives.” (read full story)

We also reported back in June about the stoning of Christians in Dearborn:

“Hundreds of angry Muslim children and adults rioted against Christians, throwing chunks of concrete and eggs at their heads, spraying them with urine and cursing at them – while police stood by and threatened the Christian victims with “disorderly conduct.” (read full story)

So now, the next step in the Islamization of Michigan is seen when you call the number for taxpayer-funded Public Assistance office. When you call the Michigan Public Assistance office you are told to “Press 1 for English. Press 2 for Spanish, or Press 3 for Arabic” And lest you think this is some sort of urban legend, here is the number 1-888-678-8914.

We invite you to call and hear for yourself. We called immediately prior to the writing of this article and verified it to be true.

Bit by bit, and day by day, the forces that be, are actively working to infuse Islam into our American way of life. It won’t be long before states begin to pass laws compliant with the Muslim Sharia. Can it be stopped? Perhaps…but not likely. You are watching the programmed implosion of what was once the greatest nation on the face of this earth.

And if you refuse to go along with this madness, you will be labeled a racist, a bigot. Your words of protest will be called ‘hate speech’, and it will be you and not them they will seek to neutralize.

Welcome to the United States of Islam…