A top government defense contractor revealed it created software that can sift through social media sites to collect information from “trillions of entities” in order to reasonably predict a... 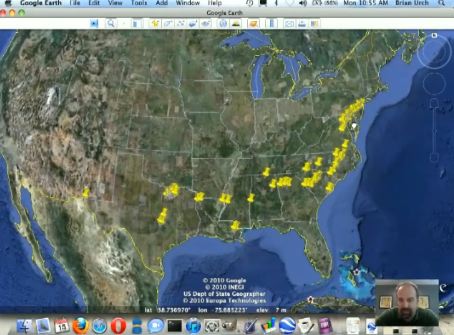 This image shows where a Raytheon employee had checked in with his smartphone. (Image: The Guardian video screenshot)
by Geoffrey Grider February 13, 2013
NOW THE END BEGINS SHARE:

A top government defense contractor revealed it created software that can sift through social media sites to collect information from “trillions of entities” in order to reasonably predict a person’s next move.

The spokesperson for the Massachusetts-based company Raytheon, Jared Adams, told The Guardian in an email that it developed RIOT (Rapid Information Overlay Technology), which is “a big data analytics system design we are working on with industry, national labs and commercial partners to help turn massive amounts of data into usable information to help meet our nation’s rapidly changing security needs.”

The Guardian obtained a video showing Raytheon’s Brian Urch explaining the RIOT software and how it uses photographs that are embedded with location data (generally they’re taken by smartphones) to conduct analysis about where the person was and where they might be going next.

This image shows where a Raytheon employee had checked in with his smartphone. (Image: The Guardian video screenshot)

Urch explains in the video that the software uses Facebook, Twitter and Foursquare. He tracks one of Raytheon’s own employees as an example. He shows all the places the employee — Nick — checked in with his smartphone. Then Urch goes to look for photos. 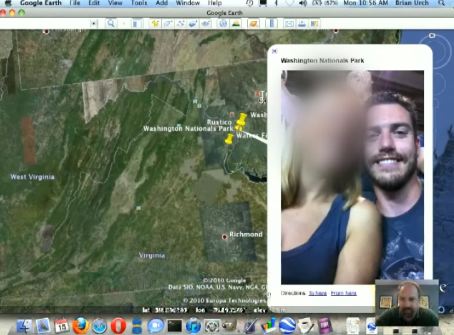 Now they can see what Nick looks like. (Image: The Guardian video screenshot)

“One of the things we’ve noticed is that when people take pictures and post them on the Internet using their smartphones that the phone will actually embed the latitude and longitude using the exif header data,” Urch said. “Now we know where Nick’s going, what he looks like, now we want to predict where he may be in the future.”

By using a “very basic analytic” called “get top places,” Urch shows a pie chart that breaks down the top 10 places where Nick checks in. He is able to analyze check ins at a specific place by month and day. For example, Nick checks in the most at the gym. June was found to hold his highest gym attendance, and he seems to go more frequently on Mondays and Wednesdays. And the “most interesting” bit of info is that Urch is able to show the time when Nick most likely would be there — 6 a.m. 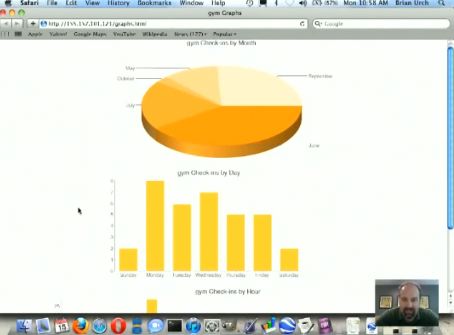 A look into the specifics of Nick’s daily schedule based on check-in trends. (Image: The Guardian video screenshot)

“If you ever did want to try to get a hold of Nick or maybe get a hold of his laptop, you might want to visit the gym at 6 a.m. on Monday,” Urch said. The software also shows the people with whom Nick has some sort of connection, whether they be tagged in checkins or shout outs on Twitter. 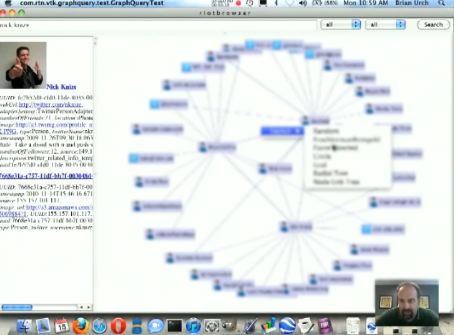 A web of Nick’s connections with other people. Some phone numbers were included too. (Image: The Guardian video screenshot)

The Guardian reports that this software has not been sold, but it was shared with the U.S. government as it was part of a join research effort that took place in 2010 to develop a system that could analyze “trillions of entities” on the Web.

The Guardian dubs the software  a “Google for spies” given that it has a similar look and search function. The company filed for a patent for RIOT in December and is expected to feature the program at an industry conference in April, according to The Guardian.

If you haven’t come up with your own concerns over the use of such technology, here is what The Guardian reported the Electronic Privacy Information Center’s attorney Ginger McCall saying:

“Social networking sites are often not transparent about what information is shared and how it is shared,” McCall said. “Users may be posting information that they believe will be viewed only by their friends, but instead, it is being viewed by government officials or pulled in by data collection services like the Riot search.”

While some have called it “stalking software,” ZDNet’s Steven Vaughan-Nichols pointed out it’s “business as usual”:

If you want to keep your private life private, you have to keep it off the Internet. It’s really that easy.