Near The End Of His Life, Mafia Kingpin Al Capone Prayed To Receive Jesus Christ As His Saviour In Terminal Island Prison In 1939

Al Capone was released from Alcatraz on January 6, 1939, and sent to the Federal Correctional Institute at Terminal Island near Los Angeles.  There, one Sunday Reverend Silas A. Thweatt, pastor of the First Baptist Church of San Pedro, California, held a church service.  When he asked if any needed prayer, Capone raised his hand.  They prayed.  That this "conversion" had taken place, no one doubted."  Al Capone was the first of 16 men to stand up.

At the close of the talk, Capone’s face seemed to radiate, and when I asked those prisoners to stand who felt the need and will to accept the Lord Jesus Christ as their personal Saviour, he was the first to rise.’ That this ‘conversion’ had taken place, no one doubted.

Back in November of 2017, I made a lot of people mad with an article entitled ‘AS DYING SERIAL KILLER CHARLES MANSON WAITS FOR THE FLAMES OF HELL, COULD YOU PRAY FOR HIS SALVATION?‘. Evidentially, there were a lot of Christians who felt that Charles Manson could not be saved, and if he could, should not be allowed to be saved because of all the evil that he had done. Ironically, of course, that’s the whole point of salvation now, isn’t it?

But speaking of evil people who ‘don’t deserve’ to get saved, here’s one that may just shock you.

“For whosoever shall call upon the name of the Lord shall be saved.” Romans 10:13 (KJV)

Without going into the long and storied history of Al Capone and his many stints in prison, I want to focus on an event that happened to him on March 19, 1939, in the Terminal Island Federal Correctional Institute in California.

Al Capone was released from Alcatraz on January 6, 1939, and sent to the Federal Correctional Institute at Terminal Island near Los Angeles.  There, one Sunday Reverend Silas A. Thweatt, pastor of the First Baptist Church of San Pedro, California, held a church service.  When he asked if any needed prayer, Capone raised his hand.  They prayed.

When Thweatt gave the invitation, according to his account in Time Magazine, “‘At the close of the talk, Capone’s face seemed to radiate, and when I asked those prisoners to stand who felt the need and will to accept the Lord Jesus Christ as their personal Saviour, he was the first to rise.’ That this “conversion” had taken place, no one doubted.”  Al Capone was the first of 16 men to stand up.

If you’re like me, at this point in the story, you are very tempted to dismiss this account as ‘urban legend’, I know I was when it was first presented to me. But it is indeed true, and was documented in Time Magazine, the Winnipeg Free Press, the Los Angeles Times and in many other outlets of the day. Shocking, isn’t it?

Al Capone was not a man afraid of prison, having had spent most of his adult life behind bars at this point. He knew he was about to be released shortly, and he was, so this was no ‘jailhouse conversion’ to impress the parole board. No, by all accounts in the newspapers, and from Reverend Silas A. Thweatt who was there preaching, Capone heard something in the message that day that convicted him, and he prayed and asked Jesus to save him.

We have preached on the streets here in Florida for the past 6 years, and in that time 20 people have come forward and prayed to receive Jesus Christ as their Saviour. Did all those people actually get saved, were they all sincere? I have no idea, but they responded to the preaching, became convicted, and prayed and asked Jesus to save them just like Al Capone did. Good enough for me.

Interestingly, the title of the sermon that Rev. Thweatt preached that fateful day was ‘Dying Like A Fool’ in a text taken from 2 Samuel 3:33. Al Capone knew he was dying of a disease that would kill him sooner rather than later, and he decided not to die as a Christ-rejecting fool. The Los Angeles Times noted that Capone attended the prison church services regularly after his professed conversion, an excellent sign that he was sincere.

What About You, Christian?

Christian, I hope this story inspires you today on many levels. First, no one is so wicked and so evil that Jesus cannot save them. Jesus shed His blood on the cross at calvary for the worst of the worst. Remember, the thief on the cross that Jesus took to Paradise was also the same guy spitting in His face at the start of the day. Don’t look at the lost as people unworthy of salvation, no matter how lost they may seem to you to be.

“But none of these things move me, neither count I my life dear unto myself, so that I might finish my course with joy, and the ministry, which I have received of the Lord Jesus, to testify the gospel of the grace of God.” Acts 20:24 (KJV)

Second, you may never preach in a prison but if you’re saved you have already been called to be a witness right where you are. And you may never have the chance to witness to a famous figure, but God will almost certainly use you as the means that a lost soul bound for Hell gets turned around and given a hope of Heaven.

Lastly, Christians are the most powerful people on the face of the earth, for they are the only ones who can point a lost soul towards Heaven. We received that commission to preach and teach the gospel at the moment we became saved. DL Moody once said ‘if you give a man a taste for soul winning, you will spoil him for anything else’. How true that is.

When was the last time YOU shared the gospel of the grace of God with someone who needed to hear it? 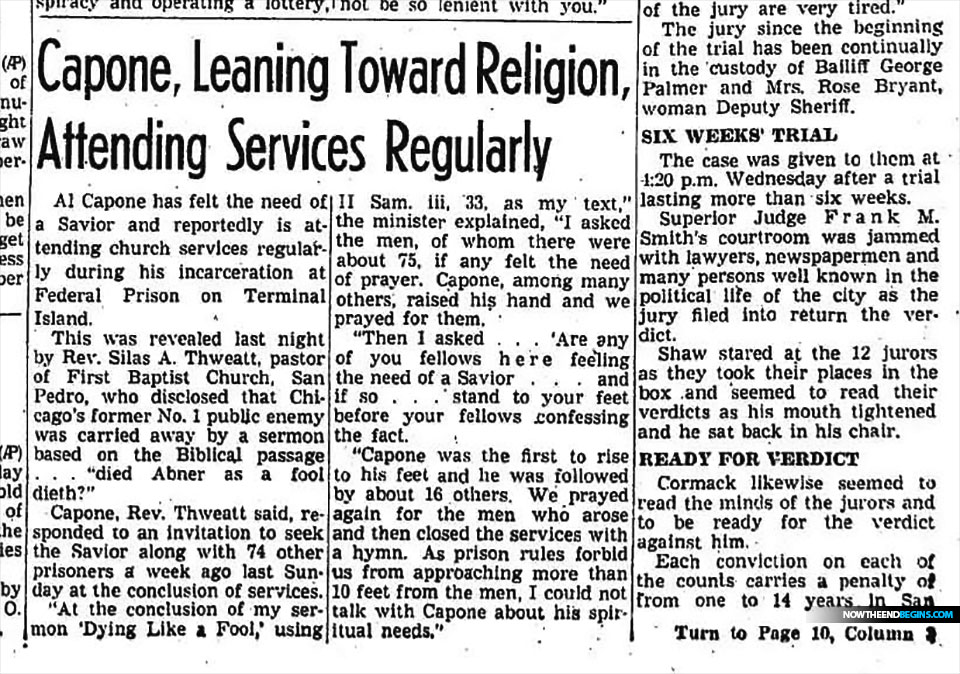 From the Friday morning edition of the Los Angeles Times, March 24, 1939