“Our community has waited long enough,” they continued. “All decision-makers with the authority, ability, and responsibility must act on behalf of the 11 million undocumented immigrants in this country,... 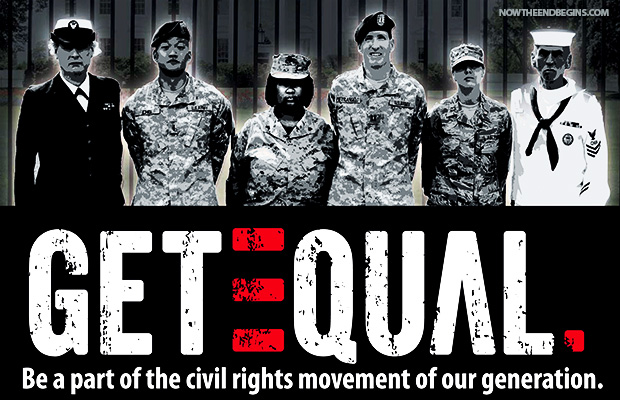 “President Obama has yet to deliver broad and inclusive relief, as promised,” the coalition of LGBTQ and immigration activists wrote in its Friday announcement.
by Geoffrey Grider September 6, 2014
NOW THE END BEGINS SHARE:

A group of lesbian, gay, bisexual, transgender, and queer people pushing for amnesty are planning a “Day of Action,” beginning with a press conference in front of the White House next week.

“There is a way which seemeth right unto a man, but the end thereof are the ways of death.” Proverbs 14:12

The LGBTQ Mafia has fully adopted the issue of amnesty for illegal alien border criminals, and added it to the ever-expanding roster of American “civil rights” which they demand at the point of a gun. Sexual orientation has gone from being a lifestyle choice to a “civil right” guaranteed by the Founding Fathers in the United States Constitution. And now we have criminals “demanding their right” to become citizens after illegally breaking-and-entering into our sovereign nation. Obama has said that he will sign an Executive Order declaring amnesty after the elections in November. We are the generation that is watching the “great experiment” of liberty and freedom crumble at it’s very foundation.

But if you think things are bad now, and they are, just wait until the LGBTQ adds the final letter to their acronym. It will be a “P” for pedophile. They will demand those rights as well, and get them. Just you watch and see.

“President Obama has yet to deliver broad and inclusive relief, as promised,” the coalition of LGBTQ and immigration activists wrote in its Friday announcement.

“Our community has waited long enough,” they continued. “All decision-makers with the authority, ability, and responsibility must act on behalf of the 11 million undocumented immigrants in this country, including 267,000 undocumented LGBTQ immigrants.”

The coalition — made up of GetEQUAL, The National Gay and Lesbian Task Force, Freedom to Marry, LULAC, United We Dream, the National Center for Lesbian Rights, National Latino Institute for Reproductive Health, GLAAD, and Immigration Equality — said it will hold a press conference in front of the White House Tuesday and follow it up with visits to the offices of members of Congress “standing in the way of meaningful immigration reform.”

Some of the participating groups have a propensity for aggressive protesting and civil disobedience.

The announcement comes as the White House appears to be wavering on it deadline to announce executive actions on immigration amid concerns from vulnerable Democrats facing tough elections in November — something that has immigration activists frustrated.

“I am calling on President Obama to act now, and to make good on his promise to offer administrative relief to the millions of immigrants, like myself, who are looking to him for leadership,” Luis Aguilera Garcia, an organizer with GetEQUAL North Carolina who is expected to participate in Tuesday’s “Day of Action,” said in a statement.

“For far too long, we have waited on political leaders in DC to show courage and to do the right thing,” he added. “We need President Obama to act now, without delay — waiting until after the midterm elections will result in nearly 70,000 deportations, and will simply be the same kind of cold and calculated political act that I thought President Obama came to Washington to put an end to.”