Freedom of speech is out the window in Obama's America in 2013. Our Christian heritage and biblical values have no place in our rush to embrace the queer culture.... 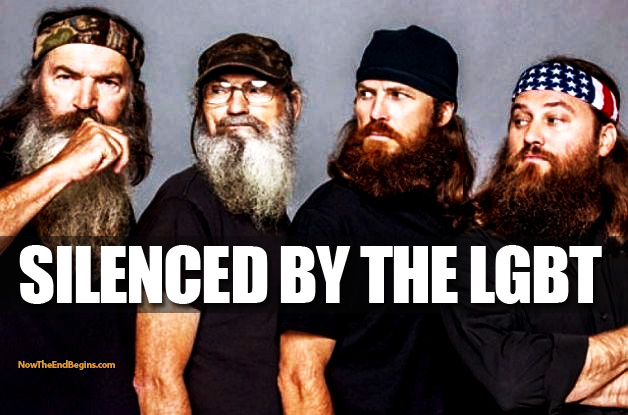 Freedom of speech is out the window in Obama’s America in 2013. Our Christian heritage and biblical values have no place in our rush to embrace the queer culture. What happened to Phil Robertson by the LGBT Nazis is a sobering warning to all those who dare to disagree with a way of life carried on by less than 9% of the population. And just for the record, the bible is 100% AGAINST all forms of homosexuality. Every bit of it.

A&E has placed Duck Dynasty patriarch Phil Robertson on indefinite hiatus following anti-gay remarks he made in a recent profile in GQ.

“We are extremely disappointed to have read Phil Robertson’s comments in GQ, which are based on his own personal beliefs and are not reflected in the series Duck Dynasty,” A&E said in a statement. “His personal views in no way reflect those of A+E Networks, who have always been strong supporters and champions of the LGBT community. The network has placed Phil under hiatus from filming indefinitely.”

The news comes after Robertson compared homosexuality to bestiality in an interview with the magazine. He’ll likely appear in season four, which bows Jan. 15, since production is largely wrapped.

“It seems like, to me, a vagina — as a man — would be more desirable than a man’s anus,” Robertson says in the January issue of the men’s magazine. “That’s just me. I’m just thinking: There’s more there! She’s got more to offer. I mean, come on, dudes! You know what I’m saying? But hey, sin: It’s not logical, my man. It’s just not logical.”

During a discussion about repentance and God, Robertson is asked what he finds sinful.

He goes on to paraphrase Corinthians: “Don’t be deceived. Neither the adulterers, the idolaters, the male prostitutes, the homosexual offenders, the greedy, the drunkards, the slanderers, the swindlers — they won’t inherit the kingdom of God. Don’t deceive yourself. It’s not right.”

GLAAD on Wednesday condemned his remarks as “some of the vilest and most extreme statements uttered against LGBT people in a mainstream publication” and said “his quote was littered with outdated stereotypes and blatant misinformation.”

“Phil and his family claim to be Christian, but Phil’s lies about an entire community fly in the face of what true Christians believe,” GLAAD spokesperson Wilson Cruz said. “He clearly knows nothing about gay people or the majority of Louisianans — and Americans — who support legal recognition for loving and committed gay and lesbian couples. Phil’s decision to push vile and extreme stereotypes is a stain on A&E and his sponsors, who now need to re-examine their ties to someone with such public disdain for LGBT people and families.”

GLAAD responded to A&E’s suspension, commending the network for its swift decision. “What’s clear is that such hateful anti-gay comments are unacceptable to fans, viewers, and networks alike,” GLAAD’s Cruz said late Wednesday. “By taking quick action and removing Robertson from future filming, A&E has sent a strong message that discrimination is neither a Christian nor an American value.”

Robertson released his own statement in response to the flap early Wednesday: “I myself am a product of the ’60s; I centered my life around sex, drugs and rock and roll until I hit rock bottom and accepted Jesus as my Savior. My mission today is to go forth and tell people about why I follow Christ and also what the Bible teaches, and part of that teaching is that women and men are meant to be together. However, I would never treat anyone with disrespect just because they are different from me. We are all created by the Almighty and like Him, I love all of humanity. We would all be better off if we loved God and loved each other.”

Duck Dynasty has become a breakout hit for A&E, regularly luring 9 million-plus viewers. The Robertson clan landed on The Hollywood Reporter magazine’s 2013 Rule Breakers list, which hit newsstands Wednesday. Phil’s son Willie Robertson, who is featured on the cover, tells THR of the show’s success: “It’s a combination of the faith, the positive and the family aspect … and it’s funny.”

Adds his brother Jase Robertson: “We’re just kind of doing what we do, and people identify with that.”

The Human Rights Campaign also slammed Robertson for his statements.

“Phil Robertson’s remarks are not consistent with the values of our faith communities or the scientific findings of leading medical organizations,” president Chad Griffin said in a statement. “We know that being gay is not a choice someone makes, and that to suggest otherwise can be incredibly harmful. We also know that Americans of faith follow the Golden Rule — treating others with the respect and dignity you’d wish to be treated with. As a role model on a show that attracts millions of viewers, Phil Robertson has a responsibility to set a positive example for young Americans — not shame and ridicule them because of who they are. The A+E Network should take immediate action to condemn Phil Robertson’s remarks and make clear they don’t support his views.” source – Hollywood Reporter