In 1997, Billy Graham gave an interview with Robert Schuller of the Crystal Cathedral, where Graham said you could get saved without Jesus. "What I hear you saying is that it's possible for Jesus Christ to come into human hearts and soul and life even if they've been born into darkness and never had exposure to the Bible. Is that a correct interpretation of what you are saying?"

Let me just say at the start of this, that I am well aware that many of you will be greatly offended by this article. I know that Billy Graham, especially in his frail old age, is loved and admired by millions. But back when he was young and strong, the gospel he preached got sidetracked along his journey, and he fell in league with every manner of apostate churches like the Mormons and the Catholic Church. In this video you will hear, in his own words, about his half-century long partnership with the Vatican, and how “the Pope and I agree on nearly everything”.

“Wherefore come out from among them, and be ye separate, saith the Lord, and touch not the unclean thing; and I will receive you,” 2 Corinthians 6:17 (KJB)

For more than 50 years, Billy Graham has preached, believed and taught at his crusades that the Roman Catholic Church represents the true gospel of Jesus Christ.  Billy Graham says in the below video “I am very comfortable with the Vatican. I believe what they believe.” Billy was only in his 70’s at this point, so age and senility does not enter in as a factor.

In 1997, Billy Graham gave an interview with Robert Schuller of the Crystal Cathedral, where Graham said you could get saved without Jesus. Here is an excerpt:

Robert Schuller: “Tell me, what do you think of the future of Christianity?”

Billy Graham: “I think everybody who knows Christ, whether they’re conscious of it or not, they’re members of the Body of Christ…God’s purpose is to call out a people for His name, whether they come from the Muslim world, Buddhist world, the Christian world, or the non-believing world, they are members of the Body of Christ, because they’ve been called by God. They may not even know the name of Jesus…and I think they are saved, and that they are going to be in heaven with us.” 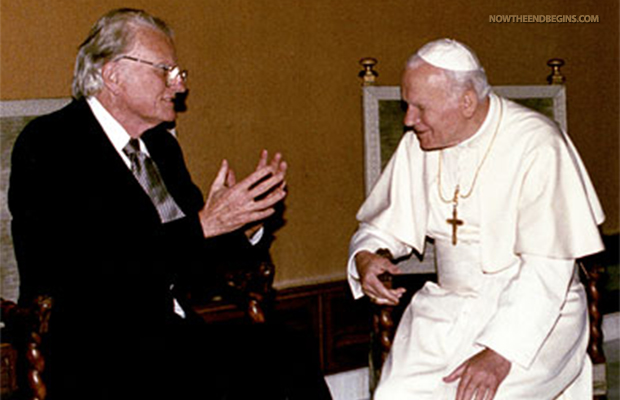 Billy Graham said that it “makes no difference” what church you belong to, none at all. He places no difference between a fundamental Baptist church, the Catholic Church, or the Mormon church.

Robert Schuller (overjoyed): “What I hear you saying is that it’s possible for Jesus Christ to come into human hearts and soul and life even if they’ve been born into darkness and never had exposure to the Bible. Is that a correct interpretation of what you are saying?”

Billy Graham: “Yes it is, because I believe that. I’ve met people in various parts of the world…that have never seen a Bible or heard about a Bible, and never heard of Jesus, but they’ve believed in their hearts that there was a God.”

Billy Graham, since the late 1950’s, has preached out of both sides of his mouth. On one hand, he preaches that we get saved by Jesus Christ alone, and then says that the doctrines of Mormonism, Catholicism and Christianity are all compatible. At his crusades, when a Catholic, Mormon, Jehovah’s Witness made a profession of salvation in Jesus Christ, his crusade workers were under strict orders to send that person back to whatever church they came from. Billy Graham declared, “Anyone who makes a decision at our meetings is…referred to a local clergyman—Protestant, Catholic or Jewish.” (San Francisco News, November 11, 1957)

Billy Graham refuses to defend the Bible as the inerrant Word of God. Newsweek magazine, April 26, 1982, examined the debate on the issue of Biblical infallibility. The article noted that Billy Graham is not on the side of inerrancy:  “Billy Graham, for one, clearly is not. ‘I believe the Bible is the inspired, authoritative word of God,’ Graham says, ‘but I don’t use the word “inerrant” because it’s become a brittle divisive word.'”

One reason for the huge worldwide success of the Billy Graham Ministry is found in Billy’s own willingness to compromise the truth of the scripture to gain favor with the rich and powerful. Once the Vatican knew that he would defend false Catholic teachings, Graham was set for life with speaking engagements, financial success and political favor. For over 50 years, Billy Graham has surrounded himself with leaders from nearly every false and pagan religion, never preaching against their false doctrines, being everyone’s friend and buddy. Go back and tell me if you have read or seen anything, anywhere, any time where Billy Graham took a stand on bible doctrine after 1957. It doesn’t exist because he never did.

“Ye adulterers and adulteresses, know ye not that the friendship of the world is enmity with God? whosoever therefore will be a friend of the world is the enemy of God.” James 4:4 (KJV)