The Rev. Rick Warren, pastor of Saddleback Church in Lake Forest and one of America’s most influential Christian leaders, has embarked on an effort to heal divisions between evangelical Christians and Muslims by partnering with Southern California mosques and proposing a set of theological principles that includes acknowledging that Christians and Muslims worship the same God. Defying some of his fellow conservative Christian critics, one of the most prominent religious leaders in the country told several thousand American Muslims on Saturday that "the two largest faiths on the planet" must work together to combat stereotypes and solve global problems.

The plan’s first step calls for Muslims and Christians to recognize they worship the same God. Interfaith reconciliation has been proceeding for years between Muslims and more liberal-leaning mainline Protestant denominations.

Over the years that NTEB has been reporting on Rick Warren and Islam, people will write in and tell us “but Pastor Warren denies that any of this is true“. To which we say, “of course he does”. And to a slight degree he is correct. Most of the work that he has done to create Islam has been through parachurch groups like Kings Way that he is not “officially” involved with, but finances and nurtures.

Adolf Hitler never once visited any of his concentration camps, and only one time ever put anything in writing so nothing could be traced back to him. But obviously, he did it. Click here to see a video of Rick Warren giving what we call the speech that started the modern-day apostate Chrislam movement. And there is no denying that.

From WND: (OCREGISTER) — The Rev. Rick Warren, pastor of Saddleback Church in Lake Forest and one of America’s most influential Christian leaders, has embarked on an effort to heal divisions between evangelical Christians and Muslims by partnering with Southern California mosques and proposing a set of theological principles that includes acknowledging that Christians and Muslims worship the same God.

Saddleback worshippers have invited Muslims to Christmas dinner and played interfaith soccer at a picnic in Irvine attended by more than 300 people. (The game pitted pastors and imams against teens from both faiths. The teens won.)

The effort by a prominent Christian leader to bridge what polls show is a deep rift between Muslims and evangelical Christians culminated in December at a dinner at Saddleback attended by 300 Muslims and members of Saddleback’s congregation. source – WND

“Before we “shake your hand” in responding to your letter, we ask forgiveness of the All-Merciful One and of the Muslim community around the world.” – Rick Warren, one of the main signers of the Yale Covenant For Islam and Christian Unity

The Holy Bible and the Qu’ran are as far apart of darkness is from light. Yet in Warren’s false teachings, they are somehow a ‘common word’. That’s heresy.

Rick Warren and the Speech That Started Chrislam

Rick Warren. seen here in 2017, slyly referring to Pope Francis as “our pope”, and then going on to brag about what a great job he is doing. He wants you to blithely assume that of course Pope Francis is the “spiritual head” over all of Christianity and not simply over the Roman Catholic corporation. More heresy!

From Stand Up For The Truth: This past Sunday, a major shift was announced by Pastor Rick Warren at his Saddleback Church in Orange County, California, that has many Christian leaders concerned. As Saddleback hosted its ”celebration of Jesus (pbuh),” attended by a number of Muslim communities in Southern California, something theologically significant happened at the dinner portion of the event.

Do Christians serve and worship Allah? Hillsong heretic Brian Houston says we do, click to hear him say it! So you are a follower of Hillsong Church, are you? Like to purchase all their Grammy award-winning “christian” music to ‘support their ministry’, is it? Well, then you might want to know that the founder of Hillsong United, Brian Houston, believes and preaches that Christians and Muslims ‘serve the same God’. Oh heresy, thy name is Chrislam. Rick Warren has had a huge impact on the Charismatic Movement and Chrislam.

Only a select number of people were invited to the dinner. A document one year in the making was presented which encourages Christians and Muslims to “appreciate the similarities of our faiths.” What does this mean? Is it simply a way to reach out a helping hand to the communities in Southern California, or is something more serious happening? source – Stand Up For The Truth 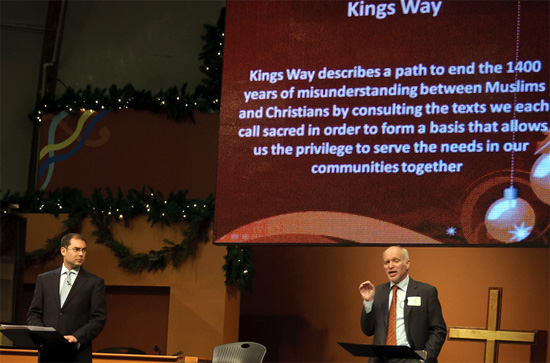 From Time: WASHINGTON — Defying some of his fellow conservative Christian critics, one of the most prominent religious leaders in the country told several thousand American Muslims on Saturday that “the two largest faiths on the planet” must work together to combat stereotypes and solve global problems. source – MSNBC

The plan’s first step calls for Muslims and Christians to recognize they worship the same God. Interfaith reconciliation has been proceeding for years between Muslims and more liberal-leaning mainline Protestant denominations.

This is the first such effort I’ve heard of by an evangelical mega-church. Many evangelicals regard Islam as Christianity’s number one enemy, and they do not at all agree that the two faiths worship the same God. This is likely to make waves. source – Jim Hinch