A schoolteacher whose body, face and tongue are covered in tattoos and who has had the whites of his eyes surgically turned black said he was prevented from teaching at a French kindergarten after a parent complained he scared their child. But the teacher, Sylvain Helaine, 35, still teaches children from the age of six up, and said that, after an initial shock when they see him for the first time, his pupils see past his appearance.

A couple of months later the school authorities informed him he would no longer teach kindergarten children, he said. “I think the decision they took was quite sad,” said Helaine. But he was quickly hired to teach first graders.

File this article today under ‘more signs of the times’, as it is almost too incredible to believe. Would you allow this man to teach your children? I absolutely would not. Anyone who is capable of this level of destruction to his own body would have no problems encouraging others, like impressionable young children, to do the same. Even Jack Chick, Christian cartoonist and gospel tract creator, did not imagine a world like this outside of the great Tribulation. But here we are, and there can be no turning back at this point.

“And Jacob called unto his sons, and said, Gather yourselves together, that I may tell you that which shall befall you in the last days.” Genesis 49:1 (KJB)

Of course, the agenda here goes past being simply, pardon the pun, skin-deep, as he says he hopes that when his first grade up students see him, they will learn to be ‘less racist and less homophobic and more open-minded’. Yes, nothing like looking like a monster from a horror movie to ‘cure racism’, monsters are people too, right? Woven into his ‘body art’ are the many occult symbols you would expect to find on someone who would willingly do this to himself. His blacked-out eyes, the whites have been tattooed with black ink, are an excellent metaphor for the spiritual darkness our world is rapidly being engulfed in. Want to know what the end times look like? Look into his eyes and see for yourself. 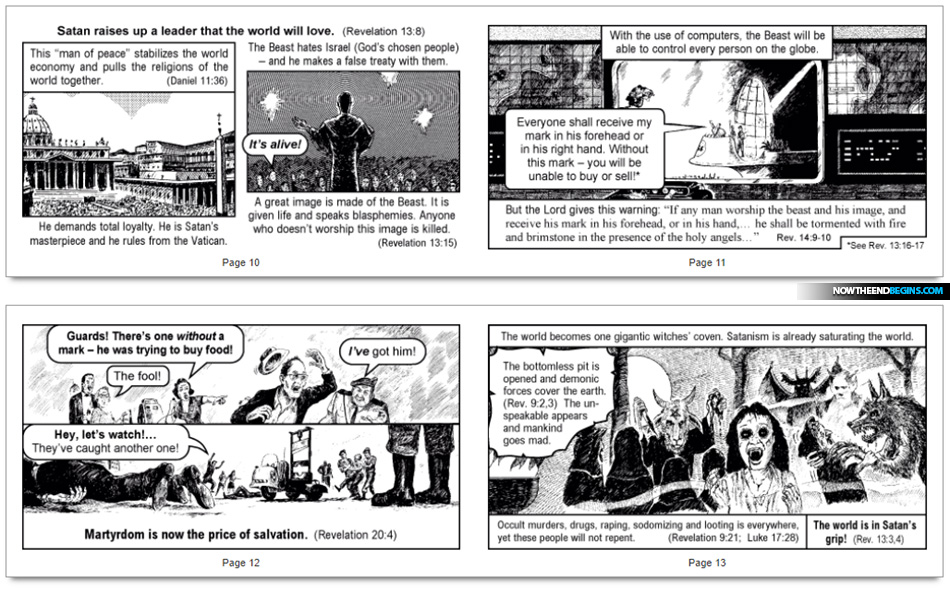 JACK CHICK THOUGHT THE ZOMBIES WOULDN’T SHOW UP UNTIL THE GREAT TRIBULATION, WELL…

FROM REUTERS: A schoolteacher whose body, face and tongue are covered in tattoos and who has had the whites of his eyes surgically turned black said he was prevented from teaching at a French kindergarten after a parent complained he scared their child.

But the teacher, Sylvain Helaine, 35, still teaches children from the age of six up, and said that, after an initial shock when they see him for the first time, his pupils see past his appearance.

“All of my students and their parents were always cool with me because basically they knew me,” said Helaine, who estimated he has spent around 460 hours under the tattooists’ needle. “It’s only when people see me from far away that they can assume the worst.”

He said last year he was teaching kindergarten at the Docteur Morere Elementary School in Palaiseau, a suburb of Paris, when the parents of a three-year-old child complained to educational authorities. They said their son, who was not taught by Helaine, had nightmares after seeing him.

A couple of months later the school authorities informed him he would no longer teach kindergarten children, he said. “I think the decision they took was quite sad,” said Helaine. A spokesman for the local education authority said an agreement was reached with Helaine to move him away from teaching kindergarten. Pupils under six “could be frightened by his appearance”, the spokesman said.

Despite the setbacks, Helaine said he would stick with his chosen career. “I’m a primary school teacher … I love my job.”

He said he started getting tattoos at the age of 27 when, while teaching at a private school in London, he had an “existential crisis”. Since then, he said, “Getting tattoos is my passion.” He said he hoped to show his pupils that they should accept people who are different from the norm. “Maybe when they are adults they will be less racist and less homophobic and more open-minded,” he said. READ MORE