North Korea's leader Kim Jong-Un has told rocket units to be on standby for an attack on US bases, according to state media.... 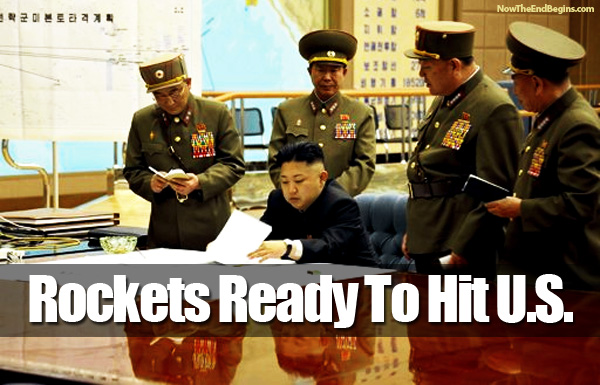 North Korea’s leader has told rocket units to be on standby for an attack on US bases, according to state media. The country’s KCNA news agency said Kim Jong-Un had signed off on the order to train sights on American bases in South Korea and the Pacific after a midnight meeting with top generals.

The move was followed by reports of increased activity at North Korea’s mid to long-range missile sites, according to South Korea’s Yonhap news agency. It comes after two American stealth bombers flew over South Korea in a show of force to Pyongyang, following an escalation of rhetoric from the North’s young leader.

Both China and Russia have appealed for calm

Moscow said the heightened military activity was slipping into a “vicious cycle” that could get out of control, implicitly criticising the US bomber flights. Foreign Minister Sergey Lavrov suggested that North Korea should also cool down, calling on “all sides not to flex their military muscle” and avoid the danger of a belligerent response.

China’s foreign ministry spokesman Hong Lei said: “We call on all relevant parties to make joint efforts to turn around the tense situation. Peace and stability on the Korean peninsula as well as Northeast Asia serves the common interest.”

The two nuclear-capable B-2 planes flew a 13,000-mile round trip from an air base in Missouri, dropping a dummy bomb on a target range in the South.

The planes were taking part in a joint South Korea-US military exercise that has inflamed tensions with Pyongyang, which earlier this month threatened to unleash an “all-out war” backed by nuclear weapons.

“This …. demonstrates the United States’ ability to conduct long range, precision strikes quickly and at will,” the US military said in a statement.

“The B-2 bomber is an important element of America’s enduring and robust extended deterrence capability in the Asia-Pacific region.”

KCNA reported that Mr Kim had “judged the time has come to settle accounts with the US imperialists in view of the prevailing situation”.

The agency said: “He finally signed the plan on technical preparations of strategic rockets of the KPA, ordering them to be on standby for fire so that they may strike any time the US mainland, its military bases in the operational theatres in the Pacific, including Hawaii and Guam, and those in South Korea.”

Following their leader’s call to arms, thousands of North Koreans turned out for a mass rally in the main square in the capital. Chanting “Death to the US imperialists” and “Sweep away the US aggressors,” soldiers and students marched through Kim Il-Sung Square during the 90-minute rally.

The US has denied its military exercise was provocative but said it was “committed to a pathway to peace” and “prepared to deal with any eventuality” in the region. source – Sky