#joebiden is rambling like that crazy drunk uncle you always avoided at Thanksgiving. How have we survived 4 years of this stupidity?... 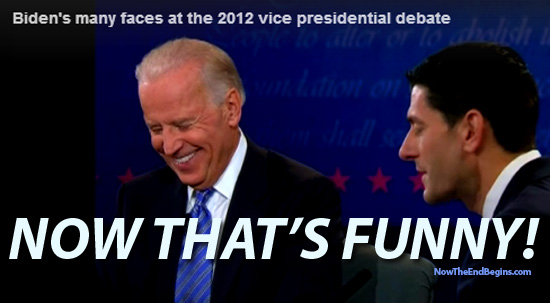 “If a wise man contendeth with a foolish man, whether he rage or laugh, there is no rest.” Proverbs 29:9

This is what we tweeted:
“As an American I would like to apologize to the entire free world for the unmitigated embarrassment of having #barackobama as our president.” – read on Twitter
“#joebiden is rambling like that crazy drunk uncle you always avoided at Thanksgiving. How have we survived 4 years of this stupidity??” – read on Twitter

From Politico: Vice President Joe Biden and Rep. Paul Ryan were the two candidates on stage at Thursday’s vice presidential debate, but a third character emerged: Joe Biden’s laugh, which didn’t escape the notice of tweeting politicos. (And led, of course, to at least three satirical Twitter accounts: Laughing Joe Biden, Biden Smirk, and yet another Laughing Joe Biden.)

TIME’s Michael Scherer: “Not sure debate cameras have been light tested for Biden’s teeth. Best to watch with sunglasses.”

Washington Examiner’s Philip Klein: “Biden’s strategy seems to be to laugh at Ryan constantly. Will it work to infantalize Ryan, or backfire like Gore sighing?”

NBC’s David Gregory: “Biden’s smile is out of control.”

BuzzFeed’s Ben Smith: “So did Biden practice laughing at Ryan???”

ABC’s Rick Klein: “Biden on verge of breaking down in laughter when Ryan talks.”

Radio host Neal Boortz: “Looking like Biden’s gameplan is to laugh his way through this.”

Townhall.com’s Guy Benson: “Will Biden laugh his ass off at the terrible economy, too?”

PBS’ Jeff Greenfield: “Biden has always had a smile that at times is really, really inappropriate.”

Washington Examiner’s Paul Bedard: “Can’t tell yet if Biden’s smirking, laughs, eye-rolling, head shaking, works for him or not against the oh-so-young looking eager Ryan.”

Former White House press secretary Ari Fleischer: “Biden is at risk of having his laugh come across like Gore’s sighs. He should knock it off.”

Republican strategist Ron Bonjean: “Biden laughing does not come off with the intended effect. It is actually hurting him. Looks very condescending.”

Washington Times’ Emily Miller: “Biden laughing when he disagrees with Ryan is so annoying. Like a child in time out.”

Comedy Central’s Indecision: “If this keeps up much longer, Joe Biden’s going to sprain his laugh muscles.” source – Politico