Abu Bakr al-Baghdadi, leader of the ISIS revolution, swore a vow this week to capture Jerusalem and Rome as he goes about attempting to construct his Muslim caliphate.... 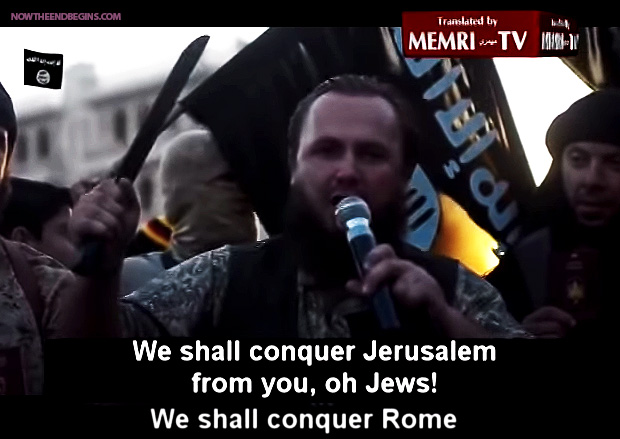 Is this the Psalm 83 war coming to life?

“They have said, Come, and let us cut them off from being a nation; that the name of Israel may be no more in remembrance. For they have consulted together with one consent: they are confederate against thee:” Psalm 83:4,5

Abu Bakr al-Baghdadi, leader of the ISIS revolution, swore a vow this week to capture Jerusalem and Rome as he goes about attempting to construct his Muslim caliphate. Al-Baghdadi has a big mountain to climb in fully wresting control of Iraq, but should he be successful there is no telling how far he can take it. Students of bible prophecy have long known that a Muslim caliphate, or the Psalm 83 confederacy as the bible says, is to rise in the Middle East to come against Israel. This could possibly be the fulfillment of that prophecy, time will tell.

“Those who can immigrate to the Islamic State should immigrate, as immigration to the house of Islam is a duty,” he said in an audio recording released on a website used by the group formerly known as the Islamic State of Iraq and al-Sham. “Rush O Muslims to your state. It is your state. Syria is not for Syrians and Iraq is not for Iraqis. The land is for the Muslims, all Muslims. “This is my advice to you. If you hold to it you will conquer Rome and own the world, if Allah wills.”

Hassan Hassan, an analyst at Abu Dhabi’s Delma Institute, wrote that Baghdadi provided the most radical challenge since the emergence of Osama bin Laden and al-Qaeda. “The whispers of support to a caliph in Afghanistan are now replaced by clear words and acts, amplified by social media,” he said. “Jihadism has evolved significantly. It is no longer limited to narrow “elitists” who travel to distant countries to wage jihad. Today’s jihad is more sophisticated and individualized and can be waged everywhere.”