After commemorating Mother’s Day with an ad featuring two lesbians, JCPenney is releasing a Father’s Day ad depicting two gay men and their children. The recent ad, published in... 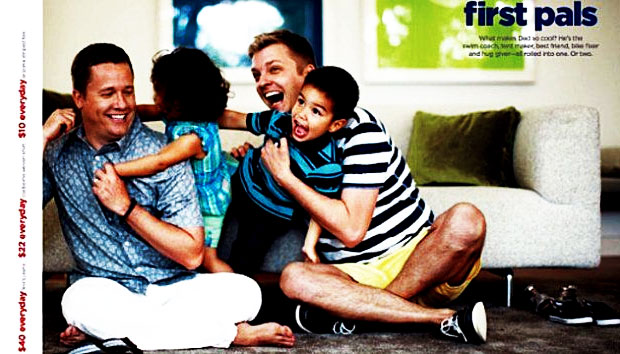 JCPenny is celebrating the sin of Sodomy

“Woe unto them that call evil good, and good evil; that put darkness for light, and light for darkness; that put bitter for sweet, and sweet for bitter!”  – Isaiah 5:20

After commemorating Mother’s Day with an ad featuring two lesbians, JCPenney released a Father’s Day ad depicting two gay men and their children. The recent ad, published in their June catalog, states that a father is a “swim coach, tent maker, best friend, bike fixer and hug giver – all rolled into one. Or two.”

Below the picture of a smiling homosexual couple playing with a little boy and girl, the ad reads: “Real-life dads, Todd Koch and Cooper Smith with their children Claire and Mason.” Last month’s Mother’s Day ad, published online and in the company’s May catalog depicted lesbians Wendi and Maggie alongside Wendi’s mother and two daughters.

The LGBT lobby, overjoyed at the most recent positive portrayal, is calling for supporters to open their pocket books to thank the company.

“You’d have to be crazy not to see the people in this JCP ad as the proverbial (and in this case, real) family next door,” enthused Jenny Block, a blogger at The Huffington Post.

Monica Cole, director of the conservative watchdog group One Million Moms, told LifeSiteNews.com that her organization is calling for a boycott of the company until they stop promoting homosexuality.

She asks supporters of traditional marriage to return their JCPenney catalogs marked “REFUSED…RETURN TO SENDER.” Cole also urges customers to unsubscribe from its mailing list and close store credit card accounts with a note politely explaining the reasons for your action.

OMM, a project of the American Family Association that combats immoral messages in the entertainment media, criticized JCPenney earlier this year when the company hired comedian Ellen DeGeneres as a spokeswoman.

“JCP’s homosexual ads are desensitizing our children by normalizing this sinful lifestyle choice,” Cole told LifeSiteNews. “The Bible clearly states that marriage is between a man and a woman. No one, including JCP, can redefine it.”