The Israeli navy boarded the Gaza-bound "Estelle" ship seeking to break Israel's naval blockade on Gaza, an army spokesperson confirmed at 11:40 am on Saturday.... 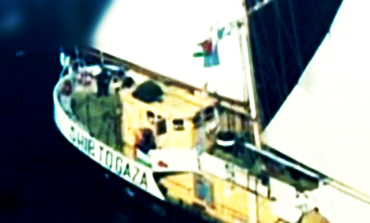 Navy seizes ship carrying 30 pro-Palestinian activists to prevent it from breaking blockade; soldiers take control of ship peacefully, without force; ship rerouted to Israel’s southern port of Ashdod, where activists will be handed to authorities. 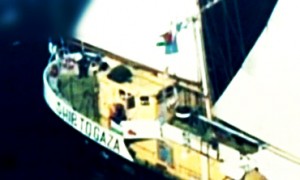 The Israeli navy boarded the Gaza-bound “Estelle” ship seeking to break Israel’s naval blockade on Gaza, an army spokesperson confirmed at 11:40 am on Saturday.

The army said the soldiers seized control of the ship, which is carrying pro-Palestinian activists, in accordance with the government’s decision and international law, diplomatic efforts to prevent the vessel from reaching Gaza’s shore had failed.

“When the passengers made it clear that they would not cooperate or accept the invitation to sail to southern port of Ashdod, it was decided to seize the vessel and rerouted to the Ashdod,” the army said in a statement.

“The Navy force operated as planned to guarantee the safety of the soldiers and passengers on the deck. The soldiers did not use force while seizing the ship, and gave the activists food and water,” the IDF confirmed.

The army added that once the ship reaches Ashdod the passengers will be handed over to police and immigration authorities.

The Estelle was carrying 30 activists from Europe, Canada and Israel, humanitarian cargo such as cement, and goodwill items such as children’s books, a mission spokesman said earlier on Saturday.

The IDF confirmation follows initial reports quoting a spokeswoman of the “Estelle” claiming the ship had “come under attack” from the IDF on Saturday.

“The Estelle is now under attack — I have just had a message from them by phone,” AFP quoted Victoria Strand, a Stockholm-based spokeswoman for the Ship to Gaza Sweden campaign as saying.

The report follows the failure of diplomatic efforts to stop the ship, after Israel’s United Nations envoy Ron Prosor wrote UN Secretary-General Ban Ki-moon this week asking for international intervention to “stop the provocation” of a small ship sailing to Gaza.

According to one official, the letter – which said the Vikings had a better moral compass than the passengers of The Estelle, expected to arrive near Gaza in the coming days – gave a publicity boost to the ship that is challenging the IDF’s naval blockade of Gaza.

“One ship does not a flotilla make,” said one official of the ship carrying what Prosor called “weekend revolutionaries” with “radical and extremist agendas.”

Israel’s blockade policy remains intact, and the ship will be stopped, one official said.

The ship, sailing under a Finnish flag, set sail in June and has stopped at numerous European ports trying to drum up support and publicity. The vessel, carrying over a dozen passengers, took on additional food and passengers off the coast of Crete earlier this week.

Among the new passengers are five European parliamentarians: Ricardo Sixto Iglesias from Spain, Sven Britton from Sweden, Aksel Hagen from Norway, and Vangelis Diamandopoulos and Dimitris Kodelas from Greece.

The IDF spokesperson added that any organization or country wishing to reach Gaza or move humanitarian aid is able to do so legally and orderly at all times through land passages and in coordination with the Israeli authorities. source – JPost