Israel is to deploy three submarines equipped with nuclear cruise missiles in the Persian Gulf, the Sunday Times reported on Sunday.... 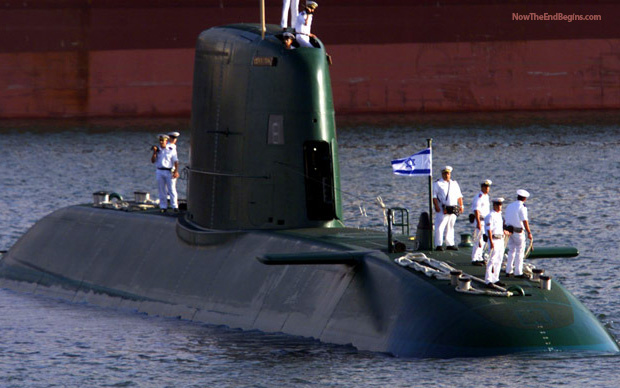 Preparing for the coming Psalm 83 war

“Keep not thou silence, O God: hold not thy peace, and be not still, O God. For, lo, thine enemies make a tumult: and they that hate thee have lifted up the head. They have taken crafty counsel against thy people, and consulted against thy hidden ones. They have said, Come, and let us cut them off from being a nation; that the name of Israel may be no more in remembrance.” Psalm 83

Jerusalem, Israel – Israel is to deploy three submarines equipped with nuclear cruise missiles in the Persian Gulf, the Sunday Times reported on Sunday. According to the Times report, one submarine had been sent over Israeli fears that ballistic missiles developed by Iran, and in the possession of Syria and Hezbollah, could be used to hit strategic sites within Israel, such as air bases and missile launchers.

Dolphin, Tekuma, and Leviathan, all German-made Dolphin class submarines of the 7th navy Flotilla, have been reported as frequenting the Gulf in the past, however, according to the Sunday Times report, this new deployment is meant to ensure a permanent naval presence near the Iranian coastline.

A flotilla officer told the Times that the deployed submarines were meant to act as a deterrent, gather intelligence and potentially to land Mossad agents. “We’re a solid base for collecting sensitive information, as we can stay for a long time in one place,” the officer said.

The flotilla’s commander, identified only as “Colonel O,” was quoted by the Times as saying that the submarine force was “an underwater assault force. We’re operating deep and far, very far, from our borders.”

The submarines could be used if Iran continues its program to produce a nuclear bomb. “The 1,500km range of the submarines’ cruise missiles can reach any target in Iran,” a navy officer told the Times.

Apparently responding to the reported Israeli activity, an Iranian admiral told the Times: “Anyone who wishes to do an evil act in the Persian Gulf will receive a forceful response from us.”

Last July, defense sources reported that an Israeli submarine had sailed the Suez Canal to the Red Sea last month, describing the unusual maneuver as a show of strategic reach in the face of Iran.

Israel has long kept its three Dolphin-class submarines, which are widely assumed to carry nuclear missiles, away from Suez so as not to expose them to the gaze of Egyptian harbormasters. source – Haaretz