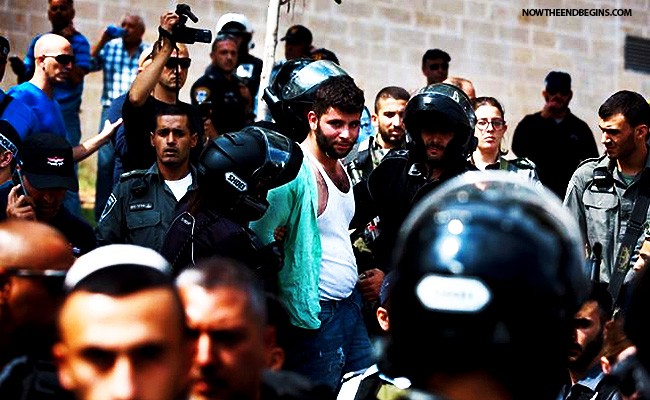 At least four attacks — three by Palestinians and one by an Israeli — threatened to escalate and spread throughout the country as Israeli police struggled to control spiraling violence.

“Pray for the peace of Jerusalem: they shall prosper that love thee.” Psalm 122:6 (KJV)

A 14-year-old Israeli and a police officer were stabbed in separate assaults while four Arabs were stabbed by an Israeli in the southern city of Dimona. In the northern Israeli city of Afula, a Palestinian woman was shot and wounded when she attempted to stab a security guard at a bus station, police said.

Israeli policemen detain a Palestinian man (C) after stabbing a Jewish teenager in Jerusalem on October 9, 2015. An 18-year-old Palestinian was arrested after a 16-year-old Jewish teenager was stabbed near a main road separating Orthodox Jewish neighbourhoods from Palestinian districts, police said. (AFP Photo)

The Afula attack came shortly after a Palestinian man attacked a police officer with a knife and tried to grab his gun near the entrance to the Kiryat Arba settlement in the West Bank. The officer was lightly injured and killed his attacker, police said.

Less than an hour earlier, a Palestinian used a vegetable peeler to stab and injure the 14-year-old Israeli in Jerusalem before he was arrested, police said.

Earlier, two members of Israel’s Bedouin minority and two Palestinians were wounded in a stabbing attack by an Israeli man in Dimona, police spokeswoman Luba Samri said. The men were evacuated to a hospital for treatment. Israeli media reported the stabber said after his arrest that he carried out the attacks in retaliation for the numerous Palestinian attacks on Israelis this week.

Dimona mayor Beni Bitton said the stabber is a “mentally ill man.” He told Channel 10 TV that two of the victims worked for City Hall, and that passers-by quickly rushed to help the wounded Arabs and provided first aid.

Prime Minister Benjamin Netanyahu “strongly condemned the harming of innocent Arabs.” He said whoever deploys violence will be brought to justice.

In Jerusalem, Israeli security forces braced themselves for more unrest, barring young Palestinian men from a sacred Jerusalem Old City site in an attempt to restore calm. Samri said men under 45 are barred from the Al-Aqsa mosque compound while women of all ages can enter.

The age limit has been set intermittently in an attempt to ensure peace at the site, as it’s mostly younger Palestinians involved in the violence.