Israel's security cabinet has approved extending the fortified fence along its Egyptian border into a section of the frontier with neighbouring Jordan, Prime Minister Benjamin Netanyahu said on Monday.... 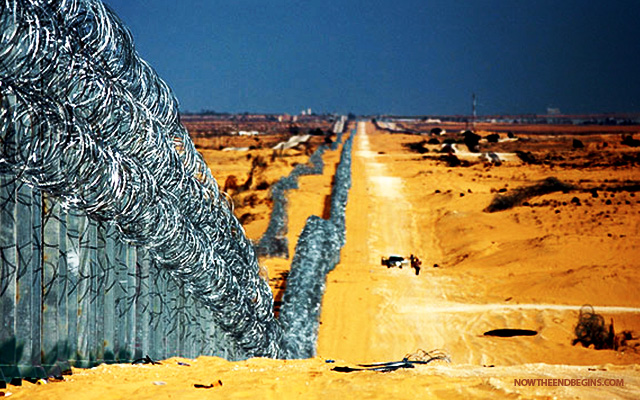 A fence along the Jordan frontier would leave Israel surrounded by a steel and concrete ring.
by Geoffrey Grider June 29, 2015
NOW THE END BEGINS SHARE:

JERUSALEM, ISRAEL – Israel’s security cabinet has approved extending the fortified fence along its Egyptian border into a section of the frontier with neighbouring Jordan, Prime Minister Benjamin Netanyahu said on Monday.

A fence along the Jordan frontier would leave Israel surrounded by a steel and concrete ring.

Jordan and Israel closely coordinate security for their 240 km (150 mile)-long border as well as for the strategic 95 km (60 mile )-long Jordan Valley within the Israeli-occupied West Bank, where Palestinians seek statehood.

But the Netanyahu government worries that African immigrants and armed jihadi infiltrators might try to reach Israel via Jordan after the Egyptian Sinai border was fenced off with a 5 metre (16 foot)-high razor-wire barrier in 2013. source

ISIS has been trying very hard to obtain a foothold in the Golan Heights on the Syrian side, but thus far have been unable to do so.

The Jerusalem Post reported back in April that the IDF began to increase its forces in the Golan Heights near the Syrian border, fears were rising on Thursday that Islamic State-linked fighters are nearing the area. According to the reports, the reinforcements include Merkava tanks and armored personnel carriers. The defense establishment is following reports that one of the anti-Assad rebel groups has sworn allegiance to Islamic State and the same group is behind the “spillover” of mortar fire from the Syrian Golan into Israel in recent days.