The Palestinian Authority Arabs are now preparing for ‘Naksa Day’, the anniversary of the liberation of Jerusalem by the IDF in the 1967 Six Day War. The so-called ‘Naksa... 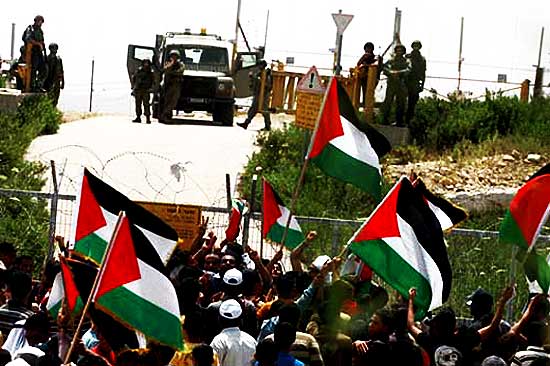 The unending hatred that the Palestinians have for the Israel will not end until the Jews are 'driven into the sea'
by Geoffrey Grider June 2, 2011
NOW THE END BEGINS SHARE:

Following the events of ‘Nakba Day’ (the day marking the ‘catastrophe’ of Israel’s establishment), Palestinian Authority Arabs are now preparing for ‘Naksa Day’, the anniversary of the liberation of Jerusalem by the IDF in the 1967 Six Day War. The so-called ‘Naksa Day’ takes place on June 7, according to the Gregorian calendar.

A website calling itself ‘The Third Palestinian Intifada’ calls on Arabs to pledge an oath of allegiance to Jerusalem on Naksa Day by marching into the city.

A statement on the website claimed that “the Nakba events have proven that Palestine can be liberated through a mass unarmed march, so long as the nation would be willing to pay any price, even a million martyrs. Our intifada continues, Israel will be gone soon, and we will pray in the mosques and churches of Jerusalem.”Meanwhile, another Arab website called on Arabs to march towards Israel’s borders this coming Friday “in memory of the martyrs of Nakba Day.” Another website issued a call for a ‘day of rage’ on Friday near the Erez crossing.” source – Arutz Sheva

Netanyahu: Israel Will Protect Its Borders

Prime Minister Binyamin Netanyahu said Thursday that the Jewish state had the “right and obligation to protect its borders,” signaling that the penetration of Israel’s border by Syrians on May 15 will not be repeated. “Israel, like every country in the world, has the right and obligation to guard its borders and protect them,” added Netanyahu. “My instructions are clear: to act with restraint but also with the determination required in order to protect our citizens and our borders.”

Netanyahu’s statement comes as Arabs plan to mark June 5 as “Naksa Day” – the date on which Jerusalem was liberated by Israel in the 1967 Six Day War.

Arabs in Palestinian Authority administered areas expect to commemorate the day with riots. Foreign Arabs, especially in Syria and Lebanon, are expected to march on Israel’s borders. PA chairman Mahmoud Abbas, who has promised a third intifada if negotiations with Israel fail, said this year’s ‘Nakba Day’ riots were only a ‘rehearsal’ for the June 5 ‘Naksa Day.”

Lebanon is reportedly closing its border with Israel on June 5 in hopes of avoiding an incident and the IDF has gone on alert.” source – Arutz Sheva