Are The Islamic Terrorists Of ISIS Traveling A Circular Route To Israel?

The New York Times today reported that a deadly confrontation worsened on Monday between Lebanon’s armed forces and Islamist insurgents from Syria who seized the border town of Arsal... 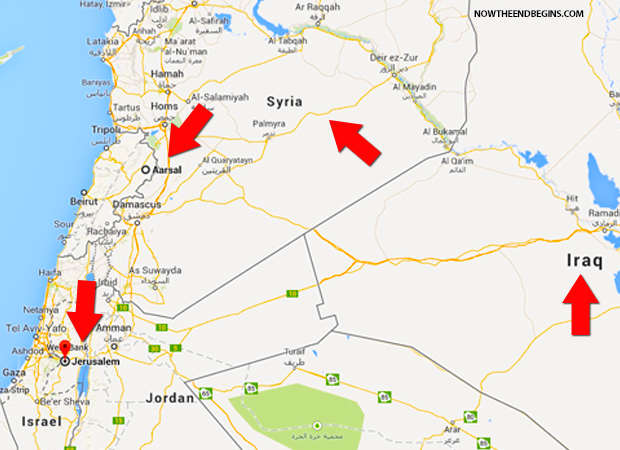 The newly-formed Islamic State caliphate is looking to surround Israel

“They have said, Come, and let us cut them off from being a nation; that the name of Israel may be no more in remembrance. For they have consulted together with one consent: they are confederate against thee: The tabernacles of Edom, and the Ishmaelites; of Moab, and the Hagarenes; Gebal, and Ammon, and Amalek; the Philistines with the inhabitants of Tyre; Assur also is joined with them: they have holpen the children of Lot. Selah.” Psalm 83:4-8

With each passing week of the incalculable damage being wrought across the Middle East by the jihadists of the new Islamic State – ISIS – something quite startling is beginning to take shape. It is beginning to look like their end game goal is to arrive at Israel’s doorstep.

The New York Times today reported that a deadly confrontation worsened on Monday between Lebanon’s armed forces and Islamist insurgents from Syria who seized the border town of Arsal over the weekend in what appeared to be the most serious spillover of the Syrian civil war into Lebanese territory since the conflict began more than three years ago.

The confrontation has gone from Iraq, to Syria, and now to Lebanon. Next stop…Israel?

The Lebanese Army said in a statement that its forces were engaged in fierce battles with the Islamists in Arsal, where witnesses reached by telephone, including the deputy mayor, said shelling had hit the town from multiple directions and thousands of residents had fled. A photo purporting to show the black flag of ISIS flying over Jerusalem. Is ISIS already there?

The Islamic State thugs are many times more fierce than Hamas, much more organized and extremely well funded. The IDF has to be watching this one through the lens of a microscope, and wondering, I’m sure,  if the goal of ISIS has been Israel the whole time.